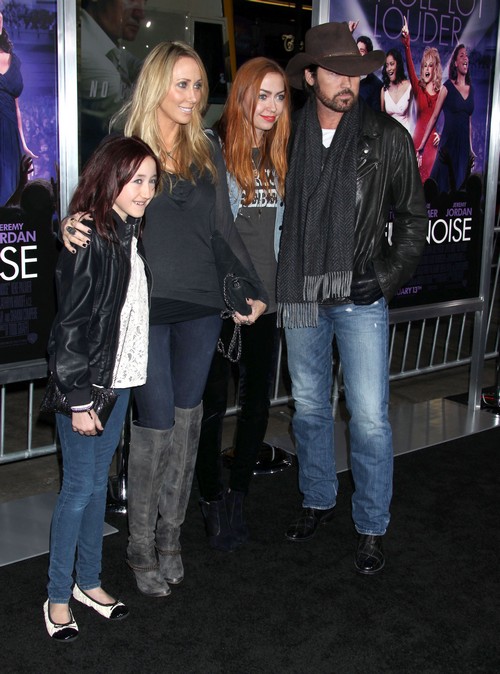 Miley Cyrus‘ mother, Tish Cyrus, has filed for divorce from husband Billy Ray Cyrus, it is being reported. The couple, have been married for nineteen years, have finally called it quits, but Tish seemed to have been the first to file the papers by citing “irreconcilable differences” as her reason for the unexpected divorce.

According to sources, the couple have been living separately for a couple of months now and since Billy rarely makes the effort to come by and spend time with his wife and kids, it was only a matter of time before Tish finally pulled the plug on her despairing marriage. Since he’s never around, she had probably had the impression that he no longer feels that they should be together.The two, have five children together, it appears like they were never able to get back to being the two lovebirds they used to be ever since the revelation of Tish’s affair with Bret Michaels came out in 2010. The 53-year old was allegedly seeing Michaels for more than a year during her marriage to Billy, which could possibly have been the downfall to their relationship, seeing how heavily publicized the cheating scandal was at the time.

What seems rather shocking to us is that Miley Cyrus has taken her mother’s side in the upcoming divorce; the singer publicly bashed her father on Twitter by calling him out for not answering his phone calls or his e-mails. Our guess is that Billy must have been really blindsided by this happening, he just wants to be left alone.

But when you have a gob-mouthed daughter who adores all the attention she can get, it’s kind of hard to have your privacy respect. The 20-year old tweeted: “since your texts and email obviously aren’t working would you like to talk like this,” in regards to her dad refusing to get in touch with her following the news Tish is over their marriage.

Billy initially filed the first divorce papers in 2010, blaming Miley’s sudden rise to fame for the reasons that kind of broke the family apart. He was then convinced by his daughter that working out any problems he had, were better than to leave the woman he had been with for 16 years at the time, and… well… it lasted another three years before Tish filed papers.

But, we do question whether this is all a publicity stunt, considering that Miley is gearing up to release her forthcoming album. The fact that Miley is trying to make it seem like she can’t reach her father so she has to use Twitter is absurd to us,- surely she can just stop by his house and have a chat with him, right?

Well, we’ll see what happens with these two, but do we think they’re going through with the divorce? Probably not. Who would want to give up on a 19-year marriage? Not us. Ha!

UPDATE: Tish is asking for full custody of the children and visitation for Billy Ray.