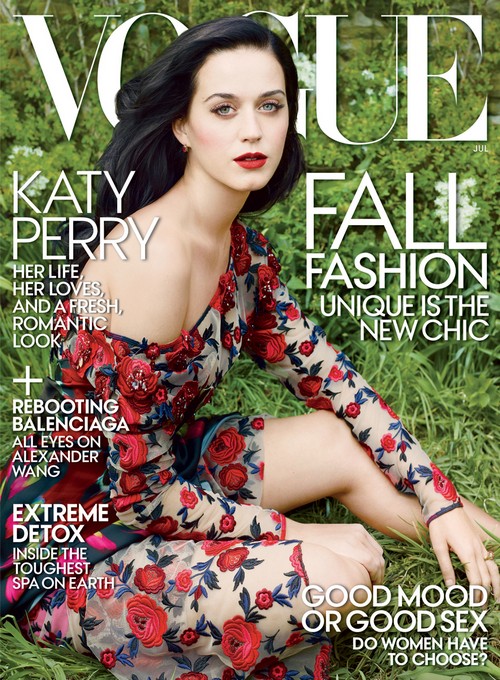 When Russell Brand and Katy Perry announced their divorce after less than one year of being married, everyone jumped to conclusion that Brand must have cheated on Perry. While we’ve heard his side of the story already, in which he continually says the marriage was ‘shaky’ from the beginning and he tried his best but couldn’t make it work, Perry takes a more lop-sided view of things.

She explains to Vogue Magazine, “He’s a very smart man, and I was in love with him when I married him. Let’s just say I haven’t heard from him since he texted me saying he was divorcing me December 31, 2011. I mean, I have to claim my own responsibility in things. I do admit that I was on the road a lot. Although I invited him time and time again, and I tried to come home as much as I possibly could. “

Text message, really?! That’s harsh, even for Russell Brand. Katy also sort of hints at the possibility of Russell cheating on her or doing something to upset her when she says, “At first when I met him he wanted an equal, and I think a lot of times strong men do want an equal, but then they get that equal and they’re like, I can’t handle the equalness. He didn’t like the atmosphere of me being the boss on tour. So that was really hurtful, and it was very controlling, which was upsetting. I felt a lot of responsibility for it ending, but then I found out the real truth, which I can’t necessarily disclose because I keep it locked in my safe for a rainy day. I let go and I was like: This isn’t because of me; this is beyond me. So I have moved on from that.”

So what was this ‘real truth’? She felt responsibility and then when she found out the truth, she didn’t feel like it was her fault anymore? That’s what she seems to be insinuating. It’s interesting, and I don’t know whether we’ll ever necessarily find out since Katy does say that she’s keeping it ‘locked in a safe for a rainy day’. I guess we’ll just have to wait until that rainy day comes.