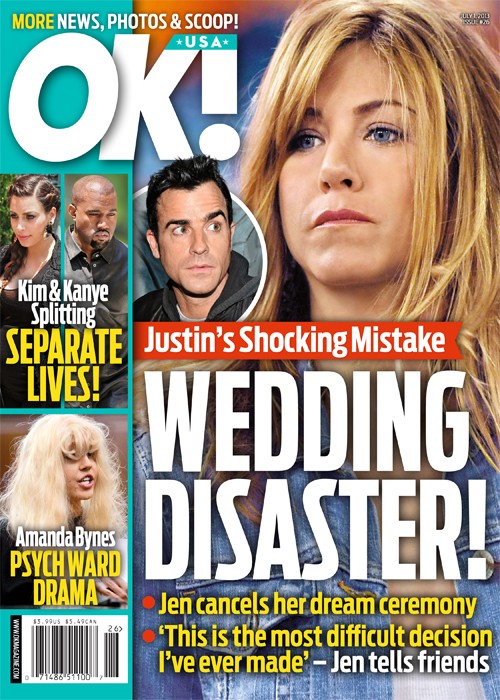 Jennifer Aniston has told friends she’s made a mistake by agreeing to marry fiance Justin Theroux, the latest issue of OK! magazine reports. The actress, who is currently still engaged, no longer plans on walking down the aisle to Justin for one simple reason… she still loves Brad Pitt!

While most people would have been able to move on from their exes, EIGHT YEARS after splitting up, Jennifer is the complete opposite and thought that by having Theroux as her soon-to-be husband and baby daddy would make her feelings for Brad disappear, but they haven’t.

The 44-year old was initially going to marry her fiance in March, but that was pushed back because she felt “she wasn’t ready”. Funny how in that month, it was also reported how she had gotten back in touch with Pitt on a friendly term which Angelina Jolie supposedly didn’t approve of.

Whatever the situation was back in that month, Jen then re-scheduled her wedding day to May but quickly decided that with all the plans she had for her big day, they wouldn’t be able to be done within that short period of time, which is a blatant lie considering that she’s a millionaire and she had two months to plan. More than enough to have the whole thing sorted out, right?

And now, it’s uncertain where her wedding day stands at, but OK!’s sources who are close to the actress already know why. Aniston is at a point in her life where she either gets back the man she loved dearly – which was Brad, of course – or she’ll remain a single woman for the rest of her life.

She’s been telling family members that she’s not rescheduling her wedding day because she’s called it off, but hasn’t told Justin just yet due to the fact that he was really looking forward into marrying a woman worth $120 million WITHOUT a pre-nup. Theroux was the one who made the move to marry Jen, and though she said yes, she hadn’t digested that question until later on when she realized Theroux isn’t the man for her.

What was Brad Pitt doing to Jennifer that has her wanting him back so badly… eight years after their divorce was finalized?! Would y’all like to enlighten us?
Stay up-to-date with us! Follow us on TWITTER, like us on FACEBOOK ,  subscribe to our RSS FEED or E-MAIL us!  We love hearing from you