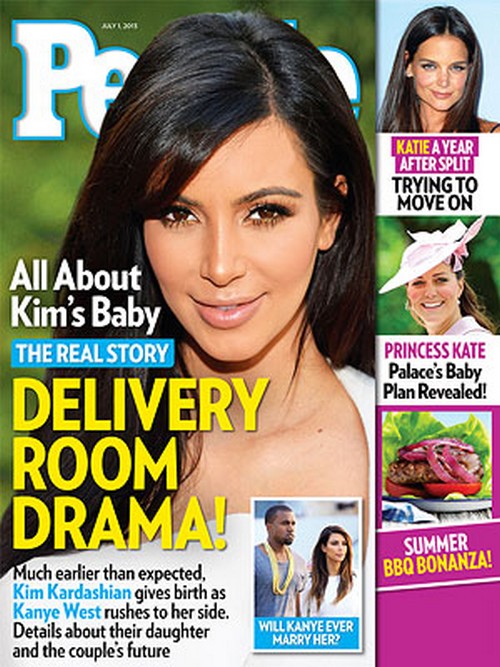 The current issue of People Magazine features the cover story, “All About Kim’s Baby The Real Story.”  The magazine claims to have all the details about Kim Kardashian‘s delivery room drama and they have the REAL story.  Kim gave birth to her first child, a daughter with her rapper boyfriend Kanye West on June 15th, 2013 one month earlier than was expected.  There was a lot of speculation before the birth that Kanye would not be with Kim for the delivery, but this was not true.  Kanye rushed to Kim’s side to support her.

Their new daughter was born early due to complications which caused her to go into premature labor.  According to People magazine, “By the next day, Kardashian had given birth to a girl, “the prettiest, tiniest thing with a full head of straight, dark hair, a cute little nose and Kim’s lips. She’s already smiling!”  Though she’s been spending time in an incubator to regulate her body temperature, a standard course of treatment for premature babies, Baby K – whose parents have nearly decided on a name – is “doing very well.”

To find out all these details and more, pick up the current issue of People Magazine on newsstands Friday.