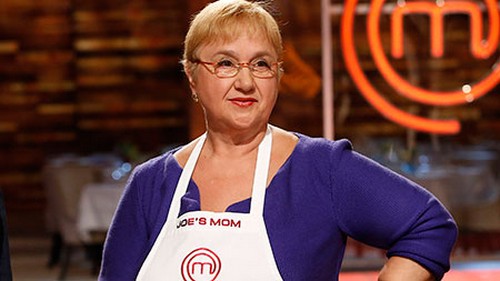 These four contestants split into two teams of two to serve the patrons a signature burger that they create. The diners bet on their favorite burger, and the two players on the team that lost went head-to-head in a final battle to determine who is leaving the MasterChef competition. Beth and Natasha made up the Blue Team, while Luca and Kathy put on Red aprons. They had 60 minutes to prep before the diners arrive.  Did you watch last week’s episode? We did and we recapped it here for you.

On tonight’s show the contestants must create an exquisite dish using foreign delicacies in the mystery box challenge. Then, a very special guest, Joe’s mom and legendary chef Lidia Bastianich, joins the judges to determine the best and the worst pasta dishes in the elimination round. Later, the contestants visit a Hollywood set and cook a lunch meal for the cast and crew of GLEE. The home cooks will split into two teams to prepare a delicious chicken, salmon and vegetarian lasagna dish. The stars of GLEE – Jane Lynch, Cory Monteith and Matthew Morrison – help the judges determine the winning team. In the end, two more home cooks will be eliminated.