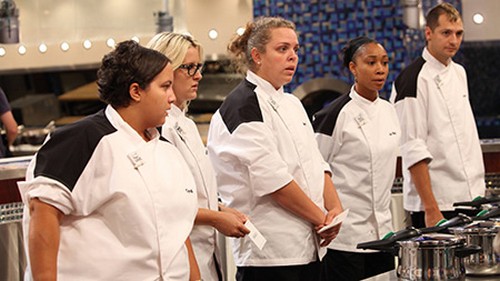 Hell’s Kitchen returns to FOX tonight with a new episode and we are down to the final five.  On last week’s show Chef Ramsay tested the remaining six contestants’ ability to communicate and work in sync during a three entrée relay race. Each team had 30 minutes to prepare three dishes with one chef in the kitchen at a time. The winning team enjoyed a helicopter tour and an exquisite caviar tasting, while the losing team was punished with backbreaking work peeling potatoes in HELL’S KITCHEN.

Later, both teams in Hell’s Kitchen pleased Chef Ramsay during dinner service but with coveted black jackets at stake, one more chef had to go home for good.  At the end of the show Chef Ramsay decided Zack’s journey had ended..  Did you watch last week’s episode? We did and we recapped it here for you!

On tonight’s show the remaining chefs get a very special surprise from their family members, and Chef Ramsay hands out the coveted black jackets. Later, Chef Ramsay tests the chefs’ originality in an intense pressure cooker test. The winner of the challenge earns an unforgettable meal with their family, while the losing team recycles and plant trees. With only five chefs remaining, Chef Ramsay adds a shocking twist in the next dinner service.

Tonight’s episode are going to be another drama packed ones, which you won’t want to miss. So be sure to tune in for our live coverage of FOX’s Hell Kitchen Season 11 “5 Chefs Compete” tonight at 8PM EST!