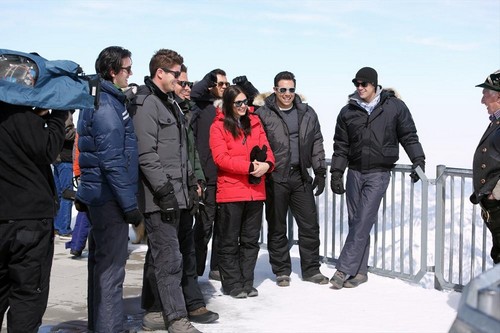 Our guilty pleasure The Bachelorette continues Monday June 24th, 2013 with another new episode as our bachelorette Desiree Hartsock heads to Europe for the first time.  There are still 11 men left in the competition vying for Desiree’s heart.  On this week’s show along with Desiree visiting Europe for the firs time the competition is ratcheted up between the men as they discover another rascal in their midst.  Who could it be?

This week the 11 remaining men hope to make this first leg of the international tour to find love a special one, starting in Munich. Chris gets to explore this culturally rich city with Desiree, but their romantic date comes to a crashing halt when another man interrupts them with shocking news. The Bachelorette takes seven guys to the German Alps, where not only do they enjoy their majestic beauty, but yodel, sled and frolic like kids in the snow.

The competition between James and front-runner Brooks turns ugly, while other bachelors make their play for Desiree. The awkward, dreaded two-on-one date has arch-enemies Michael and Ben facing off. Whose strategy works and which man stays? But two men are overheard scheming about what they will do after this journey, and the other guys are anxious to make Desiree see one of them for who he really is.

Desiree and Chris tour the heart of the old city, sightseeing, sampling sausages and beer and even trying on lederhosen. The two swap relationship stories, and Chris ends by reading a romantic poem he penned just for her. Touched by his sincerity, she kisses him. Is this the start of something special? Rock and pop star Matt White serenades the couple with his hit song, “Love and Affection.” Love is in the air, but do both of these people feel the same way?

The next day, Desiree takes seven men on a group date to the German Alps. They ride in a gondola to the highest peak in all of Germany. They’re taught how to yodel, with the Bachelorette enjoying their antics. The group has a blast as they sled down a black diamond ski slope. What awaits them is a spectacular igloo hotel totally carved out of snow and ice. As Zak and Drew profess their love for Desiree, James and Brooks go all out in a ferocious battle.

A dramatic two-on-one date pits two bitter rivals against each other – Michael and Ben. Can they get past mutual dislike and concentrate on Desiree? One man goes on the attack and attempts to get his adversary to admit to being a fake. The other man decides just to take it on the chin and refrains from using the same kind of verbal shots. As the volatile date progresses, the aggressive bachelor goes in for the kill, and his opponent abruptly storms out, leaving Desiree disappointed with the remaining man. Will his nasty approach pay off with a rose, or will it backfire and send him home? And what about his rival?

Drew and Kasey share a shocking revelation with the group about what they heard two of the bachelors say about the wild time they expect to have after they appear on “The Bachelorette.” But their plans to tell Desiree the ugly truth fall through when she cancels the cocktail party, and now everyone scrambles about what to do next. Will the playboy get a rose – and if he does, when will Desiree discover the truth about him? Either way, only eight men will remain to travel to the magnificent city of Barcelona.

Don’t forget to tune in Monday June 24h, 2013  for our live coverage of The Bachelorette Desiree Hartsock, Week 5 at 8PM EST.