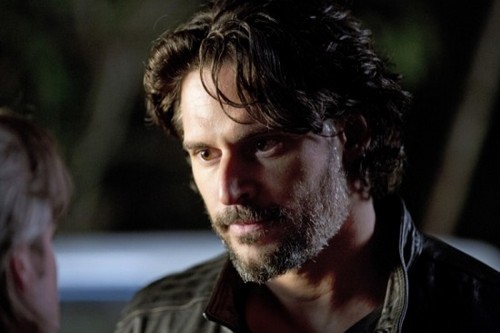 Attention Truebies!!  Tonight True Blood continues with another new episode called, “The Sun.”  On last week’s premiere it was what we expect from True Blood, jammed packed full of action. in the wake of Bill’s blood-soaked reincarnation, Sookie, Eric, Jason, Jessica, Tara, Pam and Nora fled the Authority compound as Sam, Luna and Emma dodged swarming guards. Bill is back as the big bad this season. Now packmaster, Alcide discovered that The Job comes with unsavory side dishes, but other major perks in the way of a three-some.

In Bon Temps, Andy dealt with parenting four newborn human-faerie hybrids as their momma tool off and left Andy to the job. Meanwhile, Louisiana Governor Truman Burrell vowed open season on vampires. Jessica returned to Compton Place as Jason hitched a ride with an eerie stranger.  Did you watch last week’s premiere episode? We did and we recapped it here for you!

On tonight’s show the Louisiana Governor has declared war on the vampires and it is going to be all about the vampires and how they are being tortured. The war has begun. Meanwhile Lilith tells Bill that he must complete her work and Bill starts to realize just how much power he has. A long-lost relative reveals himself to Jason and Sookie.

After Tara is victimized by a new government weapon, Eric takes matters into his own hands in an effort to thwart Burrell’s anti-vampire initiatives. On the road to work, Sookie is drawn to a handsome stranger who shares her faerie abilities. Sam is unnerved by supernatural-rights zealot Nicole, and is confronted by Alcide and Martha about Emma’s future. Bill contemplates the scope of his heightened powers.