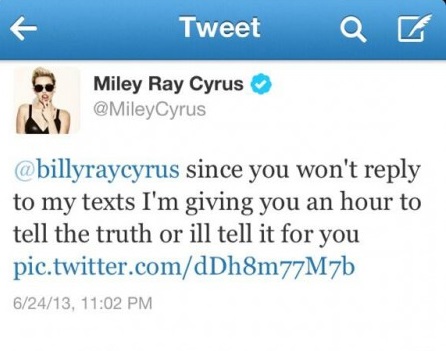 Miley Cyrus isn’t getting along with her dad Billy Ray Cyrus very well following her mom’s decision to divorce her husband earlier this month. But now, thanks to Miley herself, new information is coming forward suggesting that Tish Cyrus‘ decision to get Billy out of her life is purely because of the fact that he has been cheating on her.

Miley has been causing a lot of controversy in the last few weeks, but calling her father out on cheating is pretty crazy. According to reports, the singer isn’t talking to her father because he simply refuses to get in touch with her; she constantly tries to reach him by stopping by at his home, calling his cell phone, but she never receives an answer.

Signs that the close father/daughter relationship the two once had was gone definitely showed in Miley’s tweet from earlier this month which read: “since your texts and email obviously aren’t working would you like to talk like this,” which prompted the Nashville-born starlet to write the following yesterday afternoon: “@billyraycyrus since you won’t reply to my texts I’m giving you an hour to tell the truth or I’ll tell it for you,” along with an attached photo of a mysterious woman.

Who is she? Nobody knows! Perhaps a long lost auntie? Nah, it’s definitely a mistress! But why is she bribing her dad to speak to her unless he wants his private life dished out to the public; Miley obviously knows something we don’t and if she’s willing to let us in on a secret, we’re listening! Ha. But soon after writing that tweet, the 20-year old took it down, before insisting her Twitter had been hacked: “Wtf? My twitter was just actin all types of cray!”

Yeahhhhh… right! Miley’s Twitter does get hacked a bunch of times, doesn’t it? She may be able to fool some of her teenage fans with that bull crap, but we’re not that stupid. Miley needs to learn how to act in public, because her siblings may not be able to take the news that their parents are getting a divorce as well as she is. It’s more than likely that Billy may have cheated, but to out your dad through social media is absolutely disgusting.

But if it’s true, Tish can’t really be mad at her hubby for cheating on her. She allegedly had an ongoing affair with Bret Michaels back in 2010 which was so devastating to the family at the time that Billy initially filed the divorce papers before dropping them a month later in hopes that his marriage could be saved.