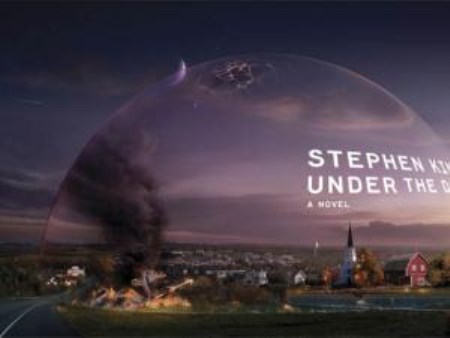 Last night CBS’s new series based on Stephen King’s novel UNDER THE DOME aired.  Although the novel was completed over 40 years ago, it is just hitting TV now.  The novel is 1,100 pages so lots of material for a great television series.

If you did not watch Under The Dome last night show, the show is about a small New England town which was sealed off from the world by an enormous transparent dome that inexplicably appears. In the opener, the dome materializes and the residents of Chester’s Mill struggle to survive as resources rapidly dwindle and panic sets in.

Last night’s show got off to a promising start and lets hope the momentum continues, fun summer television. After the first few minutes of the show, bam…down comes the dome. We see a cow split in half, severed arms, dead birds with their necks snapped, planes crashing, cars and trucks crashing. A few people who get too close to the dome have these weird seizures and mumble about falling stars.

We have a great review of last night’s show below down by our friends C & C over at Double Aardvark Media.  So if you missed the show take a look at the You Tube below.