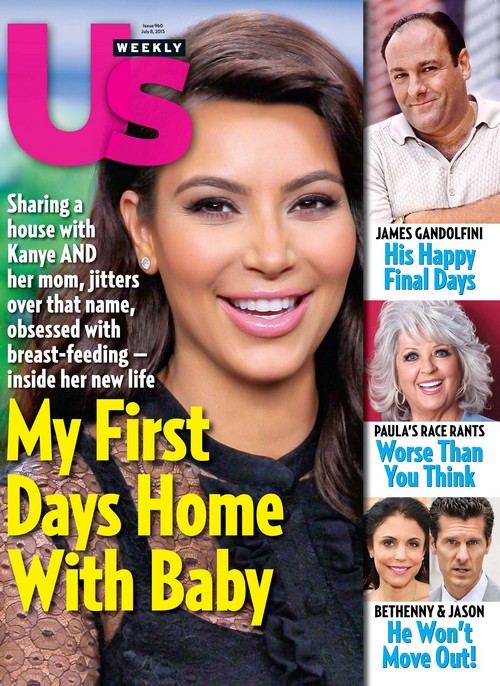 Kim Kardashian is what all the tabs are talking about this week, and Us Weekly ain’t no different. The magazine caught an exclusive interview with Dr Mehmet Oz who has seen Kim since the birth of her child North West and he had a lot of dishing to do on what Kim’s requirements are with her baby, seeing that it was born 5 weeks early, while baby daddy Kanye West can’t stop holding his precious little girl in his arms.

Kardashian has been in hiding since the birth of her child, but that is purely because she doesn’t want the paparazzi anywhere near her, especially when she’s with her petite baby. Yup, little North West is very small and has therefore been instructed to keep the little one away from the world “because the child should still be in utero, the parents need to keep her as close as possible, for warmth and security,” Mehmet tells the magazine.

Believe it or not, but it wasn’t actually Kim’s idea on naming her baby girl North West, in fact the entire Kardashian family were not too pleased when they were told what she was planning to name the child on the birth certificate. UsWeekly shares that the name was Kanye’s idea, he felt was appropriate and unique as he explained to the family that there’s nothing higher than north – an uplifting name is what he wanted so Kim settled for it in the end, but says she’ll call her ‘Nori’ for short.

A few friends have shared that Kim and Kanye are both over the moon to be first-time parents; they can’t believe it. Kanye and his reality star girlfriend constantly gaze at their daughter and smile whenever she makes a funny gesture, while Pussycat Dolls creator Robin Antin told the publication in its newest issue: “Every time she smiled, I was like, ‘Kim, get a picture!’ And Kim said, ‘I’ve taken a million.’”
Aww, that’s so adorable! Catch the issue on sales now.

Kim Kardashian has returned to social media, check out what she had to say, CLICK HERE…