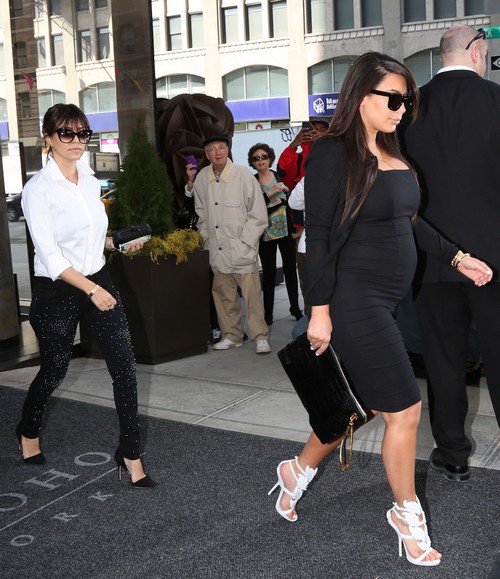 Kourtney Kardashian is not pleased by Kim Kardashian‘s plan on taking her daughter North West with her to Europe as Kanye West starts his world tour. The rapper, who has yet to confirm the dates for his tour, has agreed with his girlfriend’s decision on having their newborn baby travel the world with them, but Kourt is extremely angry about the whole thing.

Having had her first child four years before Kim’s, Kourtney knows the ins-and-outs of being a good mother and knowing what’s best for her children. If she was in her sister’s position, she would never allow the baby girl to travel all around the globe at such a young age. The 34-year old believes that the first few months should be spent at home; learning how to do all the things it requires to take care of a baby, but Kim isn’t interested.The reality star misses her luxurious lifestyle and whilst she’s currently still in hiding as she nears her $2 million magazine deal to sell exclusive baby photos, she can’t wait to finally be out and about and show the baby to the world. A source had told Life & Style: “She was disgusted when she learned Kim plans to take the baby on Kanye’s European tour so soon after the birth.”

Reports have been claiming that Kim hasn’t even adjusted to motherhood yet, she has been receiving constant help from her mother Kris Jenner, which is understandable, but when it comes to changing nappies and dressing your daughter, surely that’s not something your mom should be doing for your child, is it? Of course not! Kourt just wants to have Kim see sense by reconsidering her idea on going to Europe when she still has so much to learn on parenting.

The source added that Kim is ready to take on the world and return to the life of luxury, she misses being in private jets, having paparazzi following her ever move whilst being in another country every other day — that’s what she loves, and by the look of things, she’s not willing to give that up. Not even for her baby. “Kim gets off on the crazy lifestyle,” a friend close to the reality star told the magazine.

“She loves the buzz of taking 10 flights in three days and always having her hair and makeup teams around and staying in luxe hotels. But she needs to know that’s in the past, at least for now. “ Kim does whatever she wants, and she’s always been self-centered, so Kourtney’s been disappointed so far,” the source continued.

Whether Kim will actually go with Kanye to Europe is still questionable. Maybe she’ll change her mind? We’ll just have to wait and see!