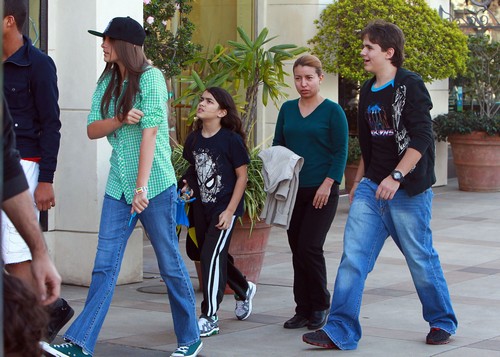 There is a lot of speculation about whether Michael Jackson is the biological father of Prince Michael and Paris Jackson. Over the years, many ‘sources’ have claimed that Michael is not the biological dad, although there was never any convincing proof to who the actual father was. Well, now a supposed ‘close friend’ of Michael’s, a man named Jason Pfeiffer, is coming forward and claiming to know the truth about Paris and Prince Michael’s biological father. He claims that their father is actually a British actor named Mark Lester.

Jason told the Mirror, “One day as we talked about his children and Debbie Rowe, he just came out and said that his children were actually fathered by Mark. Michael calmly said, ‘My friend Mark donated the sperm.’ I was taken aback, but I didn’t think to ask any more questions about the procedure.”

Now, Jason has had some doubts shed on his relationship with Michael already when he claimed that he had an ‘intense, sexual’ relationship with the pop star. These days, it’s always hard to believe someone who makes outrageous claims without proof, especially when they could so easily be making stuff up. However, Mark Lester himself has admitted that it’s possible that he’s the biological father of Prince Michael and Paris.

According to reports, Mark admitted that Michael Jackson asked a few close friends for anonymous sperm donations, and he then picked one of them to conceive his children with Debbie Rowe. While Blanket, his youngest child, is said to be his only ‘biological’ kid, there were always doubts about who was the father of Prince Michael and Paris. While we certainly can’t prove that Mark’s sperm was the one that Michael picked, I don’t know how this Jason Pfeiffer can prove it either – unless Michael told him.