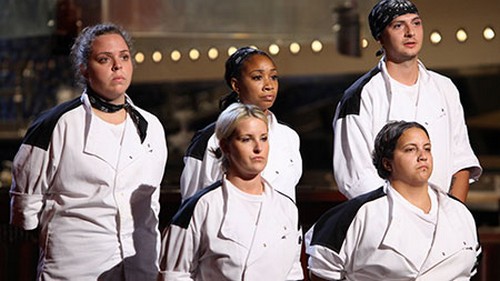 Hell’s Kitchen returns to FOX tonight with a whole new episode.  On last week’s show the remaining chefs got a very special surprise from their family members, and Chef Ramsay handed out the coveted black jackets. Later, Chef Ramsay tested the chefs’ originality in an intense pressure cooker test.

The winner of the challenge earned an unforgettable meal with their family, while the losing team recycled and planted trees. With only five chefs remaining, Chef Ramsay added a shocking twist in the next dinner service.  Did you watch last week’s episode? We did and we recapped it here for you!

On tonight’s show the challenges don’t stop now that the chefs have received their black jackets, as Chef Ramsay surprises them by bringing back a team of previous HELL’S KITCHEN winners to challenge them at dinner service. Ramsay lets the teams design their own menus for dinner service and the finalists will go head-to-head with the returning champs. Tune in to see if this season’s competitors can take the heat.

So be sure to tune in for our live coverage of FOX’s Hell Kitchen Season 11 “5 Chefs Compete Part 2” tonight at 8PM EST!