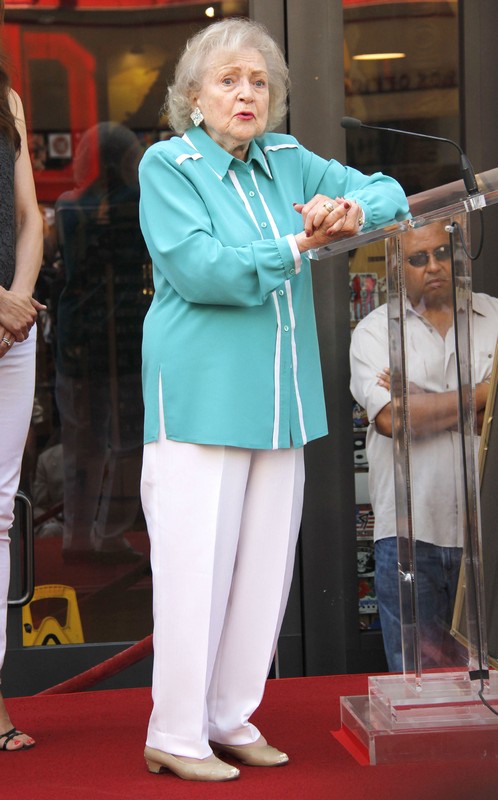 June 16th proved to be a big networking meeting for Kris Jenner. While some Hollywood hotshots spent their time at the Daytime Emmy Awards focusing on the festivities, Kris was there to work the room and line up guests for her new talk show. This woman is always on a mission and this particular occasion was no different.

What made it unique was good ole Betty White who swooped in and dropped a bit of a grenade and then sauntered off with a smile no doubt.  According to the July 8th print edition of National Enquirer  Betty asked Kris why Kanye West never smiles. She then joked that Kris needs to teach Kim Kardashian how to make a man smile. In the moment Kris shrugged it off but according to sources the comment hit a nerve. Kris immediately told Kim and agreed with the Betty’s sentiment! Kanye’s chronic misery is really a bad look for their brand. If he is going to roll with the Kardashian family then he best learn how to fake it with the best of them too.

Apparently Kris thinks, maybe rightfully, that Betty’s comment carries some weight. She no doubt asked Kim to put a bug in Kanye’s ear about how he carries himself when out with her. Let’s face it, the man either looks miserable or else he is one wrong comment away from a fist fight, either way he hardly appears happy.  Do you think that Kanye would change his demeanor to appease Kris? Is that even the remotest of possibilities? Is there some truth to the notion that Kim can’t make a man smile? If you look at her track record she has made a whole string of guys miserable before they’ve run for cover! Tell us your thoughts in the comments below!