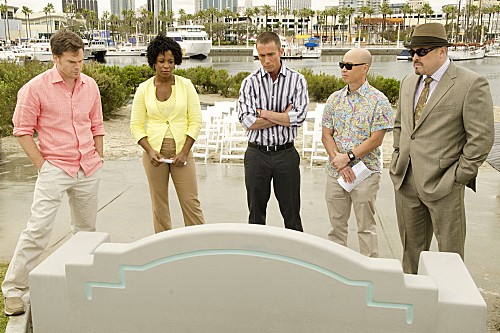 He is funny, he is cute and he is a serial killer but Dexter still remains one of my favorite men and television shows.  Tonight on Showtime Dexter hits the airwaves with the premiere of its eighth and last season called, “A Beautiful Day.”  At the end of last season La Guerta was hot on the pursuit of Dexter and finally found him with a dead Hector.  Dex gave her the paralytic shot to the neck.  Harry was there and asked him what the plan is. He was not going to kill her – he was going to set her up.

Deb showed, La Guerta cames to and told Deb to kill Dexter. La Guerta said, this is not who you are.  Dexter told her that everything La Guerta said is true. He dropped the knife and spread his arms and told her to do what you’ve got to do. Deb is crying and calling his name. She shoots. Holy crap she shot La Guerta. Then she takes her in her arms and sobs as she holds her body.  Dexter is stunned.  If you want to refresh your memory of where we left off last season, you can read our full and detailed recap of the season finale, right here.

On tonight’s show we rewind ahead six months since LaGuerta’s murder – and Dexter is still managing life as a dad, brother, and serial killer. Debra now works as a PI for a private firm and Batista has replaced her as Lieutenant, she clearly has not turned herself in.  Rumor has it she is going to turn to drugs to help her conscious.  Meanwhile, Miami Metro investigates the murder of a man who has had pieces of his brain removed.