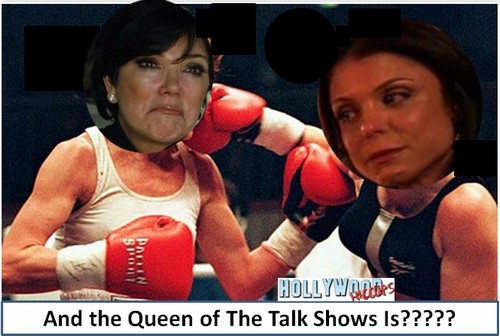 I think the feud brewing between Kris Jenner and Bethenny Frankel was inevitable, don’t you? Both are hard core business women that seem to care about precious little besides success for their self made brands. Pitt them against each other and it was going to get ugly fast and that’s preciously what has happened. Bethenny’s test run of her talk show did well enough last year to get her a regular daily chatfest starting in September and Kris’ show begins July 16th.

According to the July 8th print edition of In Touch both ladies showed up for the Daytime Emmy Awards with their best game face on. They were actually very civil to one another but make no mistake- they are not friends.

Instead behind the scenes both Kris and Bethenny are looking to book guests with the guarantee that they will not appear on the others’ show! I have to wonder how that little catch is working out whenj it actually comes to booking. Both Kris and Bethenny want to chat with stars who have big projects dropping this fall, but I’m sure those stars will be doing the typical media blitz to promote their endeavors. Are they really going to care about choosing between these two or will they land on Ellen DeGenerous’ couch instead?

Will you be watching Kris or Bethenny when they land on daytime television?  Bethenny is said to be going the girlfriend route and wants to also tackle topics that women discuss when together. Kris will likely stick with famous guests. I have to wonder how Kris will do when so many in Hollywood really see her as an opportunist rather than a bonafide a-lister.  Tell us your thoughts in the comments below!