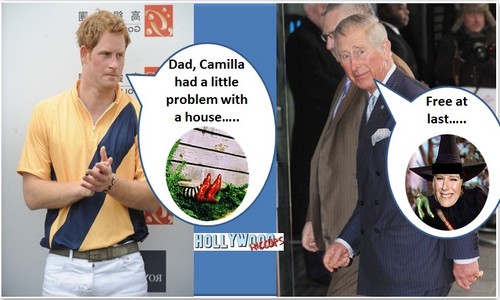 Can you imagine having your mother die in a tragic way and then watch as your father, Prince Charles marries the mistress that he cheated for years with?  Well that’s exactly the situation that Prince Harry finds himself in every day of his life. He, like the rest of the royals cannot stand Camilla Parker-Bowles but somehow has to tolerate her, until she crosses a line as she did just last week.

According to the July 8th print edition of GLOBE Camilla decided to take yet another rotten swipe at Kate Middleton and the end result was infuriating for Prince Harry who just so happened to over hear ever rotten word. Camilla told Kate that once she has the baby William will find a mistress- someone that he really loves and is connected to! Then Camilla went on and on about how wonderful William’s future mistress would be.

Camilla was really just plain stupid to describe a scenario that paralleled her relationship with Prince Charles right in front of Harry! He told his evil step monster to shut her mouth, acting as a protective brother-in-law. While describing the idea of William cheating Camilla insulted the love that he has for Kate as well as showing him an enormous amount of disrespect. We all know that William has a million good qualities and he is absolutely respected by everyone.

It has to be horrendous to see first hand what a drunken, rotten lush this chick is and know that she is really headed for the throne sooner rather than later. The family has to be horrified to even imagine Camilla helping to lead the country and yet there’s little if anything that they can do about it!

How do you think Harry actually deals with having Camilla in his life at all? Tell us your thoughts in the comments below!