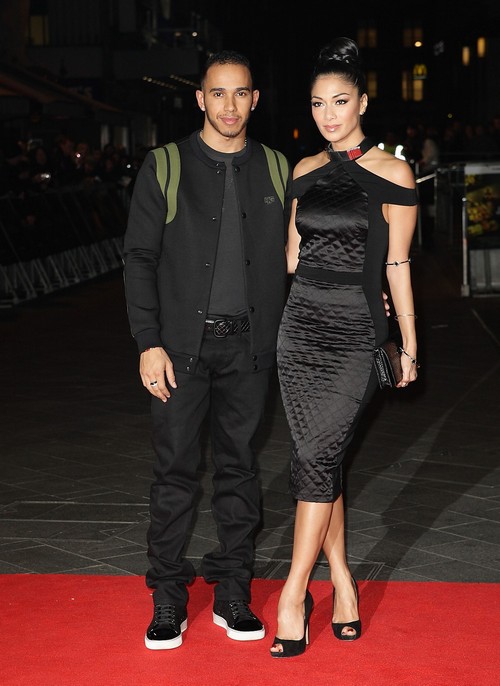 Nicole Scherzinger and Lewis Hamilton have broken up, according to The Sun. The twosome who have been together since they first met at the MTV Europe Music Awards in 2007 have reportedly ended their romance together due to their working schedules that’s keeping them apart for too long. While the former Pussycat Dolls is busy filming X Factor UK, Lewis is held up at the Grand Prix and can’t seem to find time to fly back and forth to see his girlfriend.

Though the couple were supposedly talking about marriage plans earlier this year, working commitments are still both of their number one priorities. Scherzinger wasn’t going to do another year of X Factor for its forthcoming season because she had already felt like she was drifting away from Hamilton who she never found time to see whilst being on the show, but after Simon Cowell offered her a pay rise from $1 million to $1.5 million, Nicole couldn’t refuse.“It’s so hard to keep up a relationship when they’re barely in the same country as each other,” a source claimed. Though the couple have been together for five years, they don’t even live together; in fact, when Nicole isn’t working on X Factor, she flies back to Los Angeles where she resides, while Lewis stays at his mansion in Switzerland. No wonder they broke up.

The source then added: “Both have supported each other in their careers and will continue to do so. But the nature of their work ultimately cost their relationship.” Scherzinger is most likely going to quit Simon’s show at the end of the year to focus on her music career again, and maybe then she and Lewis can try and start again. And if they do get back together, how about buying a house together so that y’all aren’t distant from each other all the time.

The Claws Are Out: Nicole Scherzinger and Kimberly Wyatt Avoided Each Other At X…