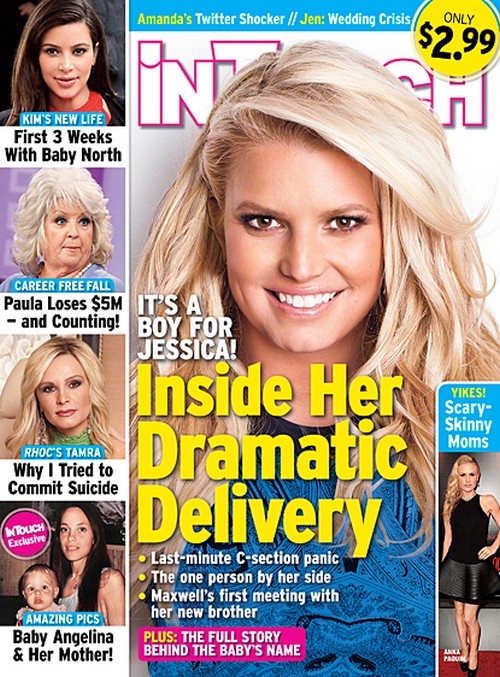 This week Jessica Simpson is featured on the cover of In Touch and her “dramatic delivery” details of  her new son Ace Knute with her fiance Eric Johnson.   Ace was born on June 30th by C-section.  In Touch is reporting that she decided to have a C-section at the last minute.  Jessica knew that Ace was much bigger than daughter Maxwell, which made her realize there was no way in hell she was going to be able to push him out! Ha.

The singer is said to have found the whole pregnancy really stressful despite the fact that many people believed it was purposely done so that she could get out of her $5 million Weight Watchers deal, because she couldn’t drop the required weight they asked her to.

During the pregnancy Jessica was very frustrated with the fact that she had a lot of things on her plate, such as having her $11.5 million mansion in the Hidden Hills renovated before the arrival of Ace.  Add to all this, she was feeling poorly throughout the last few months; constantly feeling sick and having to ditch an evening out with friends due to her poor health. The source for the magazine had said: “This pregnancy has been difficult. But she is so blessed and is in the best place right now. She could not be happier!”

Also in this week’s issue another topic that’s hot on everyone’s mind is the Paula Deen scandal. Well, according to to the mag’s latest issue, the celebrity chef has reportedly lost $5 million in her endorsement deals which included Target, Wal-Mart, and the Food Network to name a few. When she made her infamous appearance on the Today show last week, people heavily criticized it as a pathetic move for her to try and save the remaining business deals she still had left.