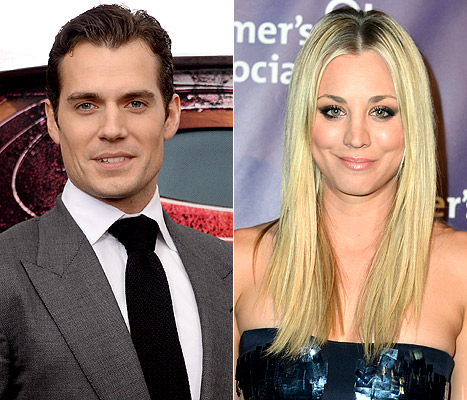 Henry Cavill and Kaley Cuoco are dating. No, you aren’t imagining things. Yes, that is the most random couple ever.

We have absolutely no idea how they met or where they met, considering that Henry is said to have broken up with Gina Carano at the beginning of May, and has seemingly been on a worldwide press tour since them. Did he meet Kaley during the press tour? And when would they have started dating?

This whole thing seems a little fishy to me, but People Magazine confirmed it. According to sources, Henry has always been fan of ‘The Big Bang Theory’, and is very ‘excited’ to be dating Kaley. Apparently, both Kaley and Henry are ‘hot for each other’, which just seems like the publicists talking to me.

What happened to Henry’s speeches about protecting his privacy and not mixing up his private and professional life? Hmm. Anyway, Superman and Penny are dating now, so good for Kaley. She’s managed to land one of the hottest men on the planet right now, and you can bet that they’re having fun.

What do you guys think about Henry and Kaley dating? Do they make sense to you? It’s Hollywood, right? Anything can happen. Let us know your thoughts in the comments.