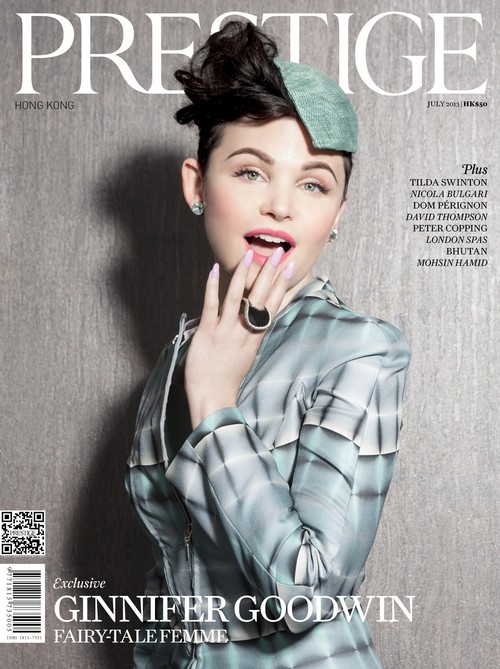 Once Upon A Time actress Ginnifer Goodwin graces the July 2013 cover of Prestige Hong Kong.  In the magazine interview Ginnifer she reflects on her career saying, “I thought I would either be an actress or an astronaut, knowing full well I’d never be an astronaut.”

In an exclusive interview and photo shoot with the magazine Ginnifer said that if a career in acting hadn’t worked out she’d have become a copy editor.  Expressing her passion for writing and calling herself a “grammar Nazi” Goodwin shows she’s as down-to-earth and grounded as the character of Snow White she plays in the fairytale TV fantasy drama series Once Upon a Time.

And with a hit TV series under her belt, a string of popular movies behind her, and now having just won the coveted role of Jackie Onassis in the National Geographic Channel’s retelling of the John F Kennedy assassination, Goodwin is a star on the rise.

The magazine is on stands now.  To find out more about the interview, head over to their website, CLICK HERE …