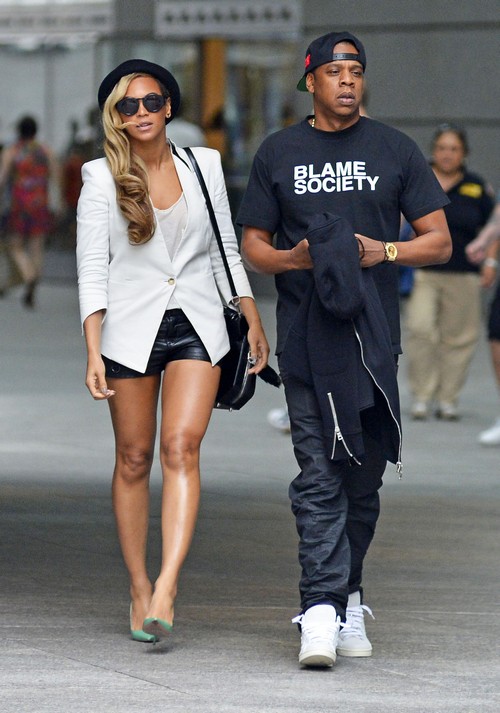 Beyonce and Jay-Z have reportedly visited Kanye West and Kim Kardashian‘s newborn baby daughter North West, following the reality star’s birth two weeks ago. Bey, who is currently on her world tour, had a day off a couple of days ago but instead of putting her feet up and rest a little, the singer wanted to see Kim, Kanye and the little baby.

It makes sense, seeing that she and Jay are super close with Kanye and seeing the little girl was bound to happen sooner than later. The couple reportedly showed up to Kris Jenner‘s home (where Kim and Kanye currently live) with several luxury gifts which included items from Tiffany, Elsa Peretti clothes and Christian Dior boots, totalling the entire package to $7500, The Sun reports.Oh, and the two didn’t go and visit Kimye by themselves… they took their one-year old daughter, Blue Ivy with them, which Kim probably was thrilled about. Now that Beyonce is showing signs she wants North and Blue to be friends, Kim is one step closer in the fabulous life of Beyonce — we’re just months away from seeing Kim try and mole herself closer to the couple in hopes that she can be one day be considered an A-list star herself. Hilarious, right? LOLz.

A source close to the couple dished the recent meet-up by saying: “Kanye is one of Jay-Z’s closest friends so he wanted to get the best gift.  They’ve had a girl themselves, so they know the right type of present.”  Blue is obviously old enough to realize what’s going on now, so we’re wondering whether or not she actually wants to be friends with North (when she’s a little older, of course). Ten years from now, North will probably suck up to Ivy and her extravagant lifestyle just like Kim is currently doing to Beyonce.

Nice to know that Jay and Bey do care about Kim, or do they?