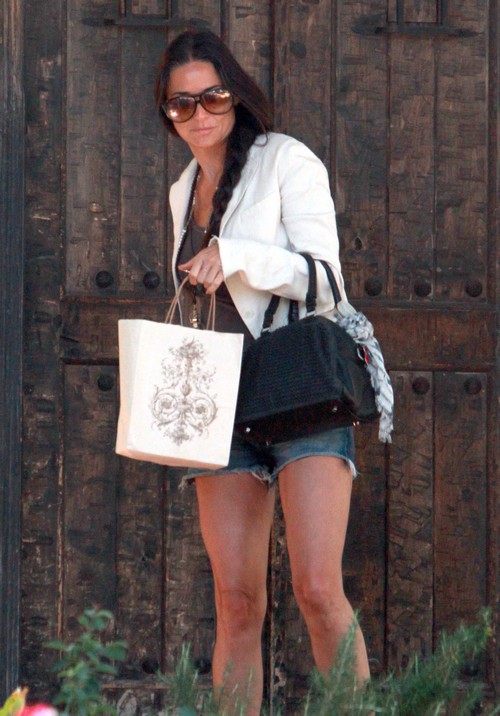 Demi Moore‘s acting career has been going no where over the past several year and now Demi is looking to put her skills elsewhere.  “Demi is acutely aware that her star has faded in Hollywood,” said a source.  Demi who has spent the last couple of years going through a lot of emotional crisis following her break up from Ashton Kutcher has gotten herself certified as a yoga teacher.  Yep Demi is now a certified Yoga teacher.

Demi used Yoga to help her get to a better place.  Last year she was doing everything she thought would get Ashton back and that included partying and drugs.  To get over it all Demi immersed herself in the study of Kundalini yoga.  A source revealed, “She credited Kundalini with helping her recover from the emotional issues surrounding her drug-induced seizure and hospitalization last year.”

As far as Demi is concerned Yoga saved her life and now Demi wants to give back to others and share what she has learned.  Russell Brand who is also a fan of Kindalini yoga was the person who turned Demi on to it.  The National Enquirer reports, “She’s been going to two-hour classes five days a week for months, so it was a logical next step. Demi studied at Nine Treasures Yoga in Los Angeles, completing the program in May.”

What do you think CDLers, would you be headed to a yoga class that Demi Moore is teaching?  Hit the comments and let us know your thoughts!