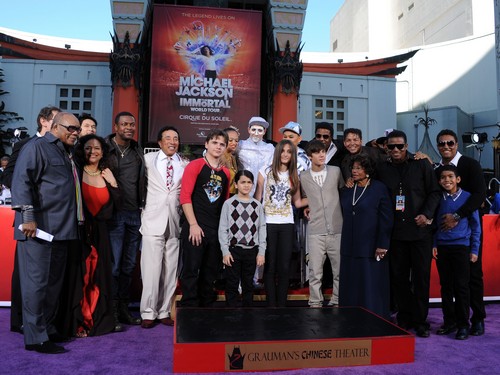 It’s pretty obvious the Jackson Family have a long history of keeping secrets and pretending that everything is fabulous.  Seriously, half of Michael Jackson‘s life was swept under the rug or completely ignored because this family is fabulous at denying what is unfolding right in front of their faces.  The way that they are handling Paris Jackson‘s recent suicide attempt proves that they’ve obviously done nothing to change how they deal with things.

According to the July 15th print edition of GLOBE, the family continues to fight and add pressure to the fragile girl who apparently has been cutting herself for a very long time. As a whole they continue to blame music, the internet and bullying for her downward spiral.

All of this  passing the buck has made it impossible for Paris to feel like there’s anyone in the family that she can turn to. As she continues to get help inpatient Debbie Rowe, Paris’ biological mom is contemplating filing for custody.  Katherine Jackson still has physical custody of her but a battle could easily be right around the corner for this family once Paris is released back out into the real world.

Sources say that if the family had paid attention then they would have noticed the scars from self injury all up and down Paris’ arms. At this point would she be better off living with Debbie Rowe? She is far from Hollywood and I’d imagine that her ranch probably would provide quite a bit of peace for a girl that needs to heal many childhood traumas.  No one seems to make it out sane if raised by the Jackson family. Think about it. At best they have huge financial problems and at worse they live to make headlines! Tell us your thoughts in the comments below!