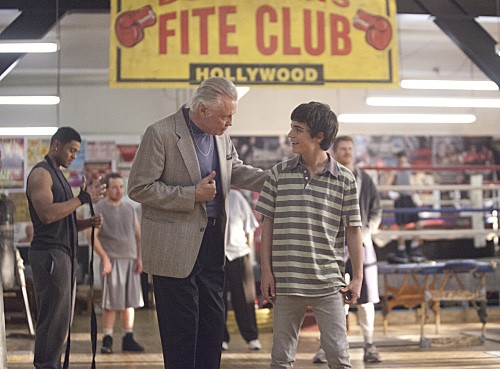 Our new favorite show Ray Donovan returns to Showtime tonight with a new episode.  On last week’s premiere episode Ray’s life was thrown into absolute turmoil when his father Mickey unexpectedly got out of prison five years early, killed a priest, and arrived in LA, vowing to take revenge on Ray for framing him.

Meanwhile, Ray’s mentor, Ezra Goldman (Elliott Gould), and his law partner, Lee Drexler (Peter Jacobson), needed Ray to find a way to get a “straight” action star out of a scandal with a transsexual. Ray had to also protect a beautiful singer from a stalker, but the case leds to tension between him and his wife, Abby (Paula Malcomson).  Did you watch last week’s series premiere episode?  If you missed it you can read our full and detailed recap, right here.

On tonight’s show Ray activates a plan to send his father Mickey back to prison. His father Mickey, played by Jon Voight, has other plans though and spends time with Ray’s wife Abby, played by Paula Malcomson and their kids. It is a serious betrayal that will have lasting implications. Ray handles two crises involving movie star clients: A-list actor Sean Walker (Johnathon Schaech) receives a threatening message at home, and action hero Tommy Wheeler (Austin Nichols) is blackmailed with a sex video.

Tonight’s series premiere looks like it going to be great and you won’t want to miss it.