Matt Damon Says Brad Pitt is Jealous Of His Privacy 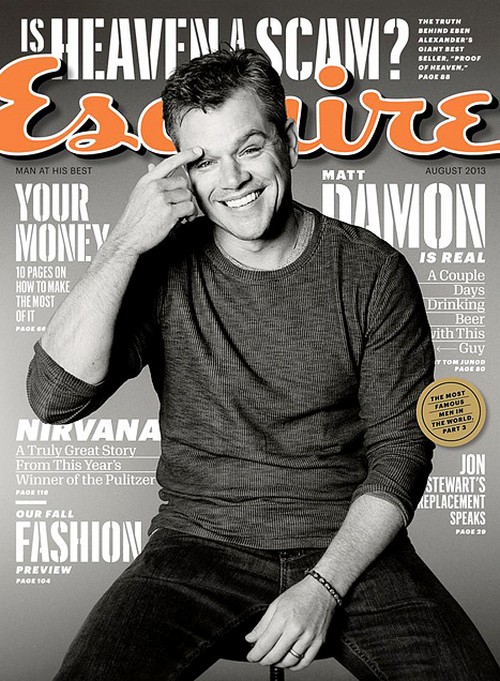 Matt Damon is the perfect example of an A-list star that is able to maintain a boundary between his personal life and his work life. While promoting Elysium, Matt covers the latest issue of Esquire Magazine and opens up about the way the public views him, and how he’s able to keep his privacy.

He attributes most of it to marrying a ‘civilian’, as he says. He explains, “I got lucky. I fell in love with a civilian. Not an actress and not a famous actress at that. Because then the attention doesn’t double — it grows exponentially. Because then suddenly everybody wants to be in your bedroom. But I don’t really give them anything. If I’m not jumping up and down on a bar, or lighting something on fire, or cheating on my wife, there’s not really any story to tell. They can try to stake me out, but they’re always going to get the same story — middle-aged married guy with four kids. So as long as that narrative doesn’t change too much, there’s no appetite for it.”

He also explains that it’s unfortunate for people like Brad Pitt and Ben Affleck, both of whom are his friends, because their relationships draw just as much attention as their movies do. He says, “I remember telling [Brad Pitt] that I walk my kids to school, and his face just fell. He was very kind, but he was like, ‘You bastard.’ Because he should be able to do that, too. And he can’t.”

Do you guys agree? I don’t think it’s just the fact that Matt didn’t marry a famous celebrity, but also the way he carries himself. People view Matt as a movie star, but he’s almost never present on tabloids or magazine covers, so it builds a sense of separation from him as an actor and him as a person. Ben Affleck and Brad Pitt obviously aren’t as lucky.