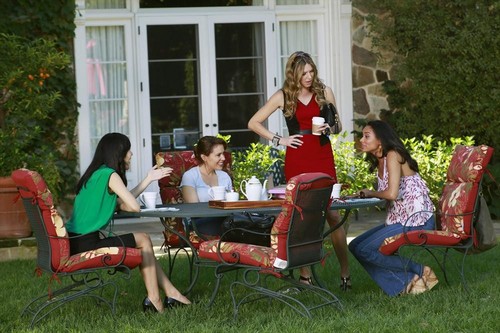 Mistresses returns to ABC tonight with an all new episode called, “Payback.”   On last week’s show Savi was anxious to find out her paternity test results, while trying to hide her pregnancy from Harry. Meanwhile the friendship between Joss and her gay client, Alex, took an interesting turn when Alex broke up with her girlfriend.

April and Richard were brought closer together when their 10-year-old daughters didn’t show up for school; and after Karen received a visit from a private investigator (Gary Dourdan) seeking answers surrounding her lover’s death, she met with his widow, Elizabeth Grey (Penelope Ann Miller).  Did you watch last week’s premiere episode? We did and we recapped it here for you!

On tonight’s show Savi desperately tries to make things right with Harry, but he continues to avoid her and discussion of their future; Karen is frightened when, on the heels of the insurance investigation, someone breaks into her office and may have accessed her patient files; April and Richard’s (guest star Cameron Bender) romance heats up; and Olivier (Mike Dopud) continues to make Joss’s life miserable at the office.

Tonight’s episode 6 is going to be an exciting one filled with drama that you won’t want to miss – the producers know they need to get you interested right from the get go therefore you can expect a great show.