Kristen Stewart Upset Someone Wrote “I Love Rob” On Her Truck? (VIDEO) 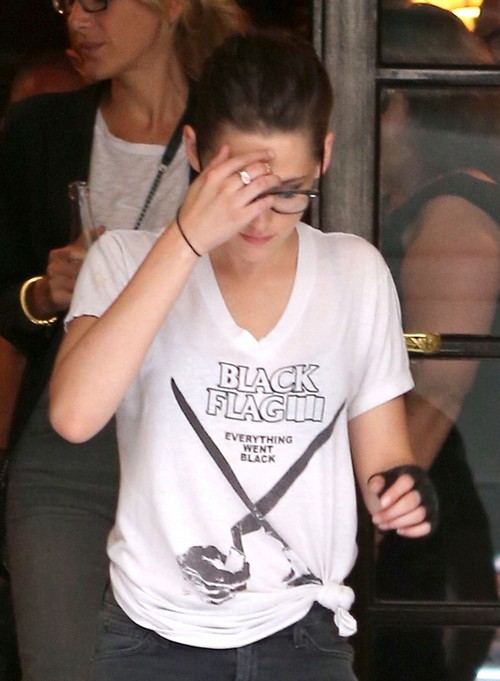 Kristen Stewart can’t seem to catch a break from her split to Robert Pattinson. After having spent some time in Paris, K-Stew probably thought that the short holiday would clear her head a little and come to terms with the fact that her ex-beau isn’t running back into her arms, but that isn’t the case.

The actress was spotted in North Hollywood yesterday afternoon, and as she made her way towards her pickup truck, she noticed someone had pranked her by writing ‘I Love Rob’ on her pickup truck, and by the look on Kristen’s face, she couldn’t have cared less about it or did she?  Kristen knew that photographers were watching her, and they were probably the ones who did it in the first place, but she didn’t give them what they wanted…… a reaction to it. Good for her!

Anyone would have thought that she would wash the writing off of her pickup truck, but the not-so-bothered Kristen just hopped into her vehicle and drove off. This could mean two things; she either really wasn’t fazed by it, or the writing brought back memories of all the good times the couple shared together. Yeah, we’d go with option number 1, wouldn’t you think so too?Kristen really isn’t a bad looking girl. Sure, she dresses weird at times but she’s a stunning woman; the fact that Rob is acting like a little brat and refusing to take her back is ridiculous. He obviously thinks he can find something better than her… good luck with that. As we previously reported, Rob is on the hunt for a blonde girlfriend, after having being traumatized by what Kristen did to him.

As sources continued to say, Kristen is still very much in love with Rob; she’s still having a hard time trying to figure out where her life will take her seeing that she loved Rob with all her heart and he won’t take her back.  She just has to respect Rob’s decision and find herself someone new.  We love Kristen a lot. Robert didn’t deserve her in the first place; the fact that she’s so humble and still drives these cheap trucks just goes to show that she’s a very nice girl who doesn’t require much.  There definitely seems to be something wrong on Rob’s end or else why would these two split up again.