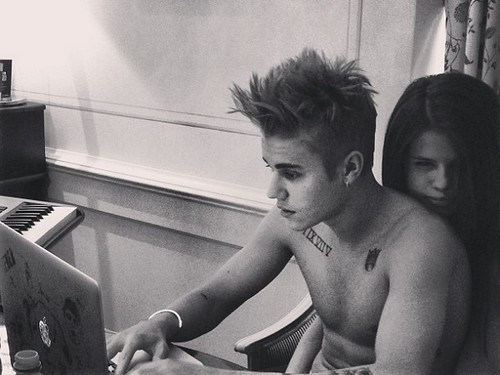 In yet another pathetic attempt to publicize her forthcoming album, Stars Dance, Selena Gomez opens up about her failed relationship to on-again, off-again boyfriend Justin Bieber. The couple split up back in January following claims the 19-year old had been cheating on Selena his girlfriend of two years.   Selena immediately pulled the plug on their romance and the two went their separate ways.

And now it appears Selena Gomez is desperate for all the attention she can get for her upcoming single Love Will Remember, which has a boy – clearly reenacted out a voicemail Justin sent Selena – saying the following: “Hey babe it’s me, I just wanted to call to tell you that I love you so so so so much. Just wanted to let you know that you are my princess. You are worthy of all of the love in the world. You are the love of my life.”

Then we hear Selena’s awful voice over a terrible instrumental beat almost talking to her ex through the song when she says, “time can’t be bought… you said you loved me, all your promises and the plans we had, what happened to that?” Note that usually when an artist sings about a heartfelt past experience, their voice cracks up a little, but with Gomez, you hear no pain — all you get is her nasal sound.

The 3:47 minute track just waffles on how she wished the relationship could’ve lasted so that they could have done the things they promised they’d do, blah blah blah. We get a strong feeling that after seeing how well her BFF Taylor Swift’s music is doing with these break-up songs, Gomez got the idea that she should do the same, especially since her boyfriend was Justin mother-freaking Bieber. Makes sense, but at least do it well.

We don’t mind musicians cashing in on their break-up stories in their songs, but at least make the song worthy to listen to because the rubbish she’s offering her “fans” is pretty disgusting. The fact that she never spoke about her relationship to Justin in public makes us quickly realize how much Selena wants her new album to do well in the charts.

Who cares if he broke your heart? If he cheats, you either do the same back to him or you put up with it. If she was a smart girl, she would have married him without a pre-nup, then divorced him and taken half of his money. That way she wouldn’t have to make these pathetic songs in hopes that people will buy this crap so that she can continue living a luxurious lifestyle. Her measly $4 million net worth will eventually run out unless she makes up with Justin.

We despise anyone who buys her album Stars Dance — oh, and what kind of stupid album title is that? That’s how you know she has nothing to sing about. Album titles are supposed to be meaningful, not give the impression that she believes in fictional stories like Santa Clause is real. Selena, get your money from this break-up song, write a book about it and then just retire, because this ‘music career’ wasn’t made for you, sweetheart.