Details Revealed About North West, Her 100 Pairs Of Shoes, Contract Visitors Have To Sign And More 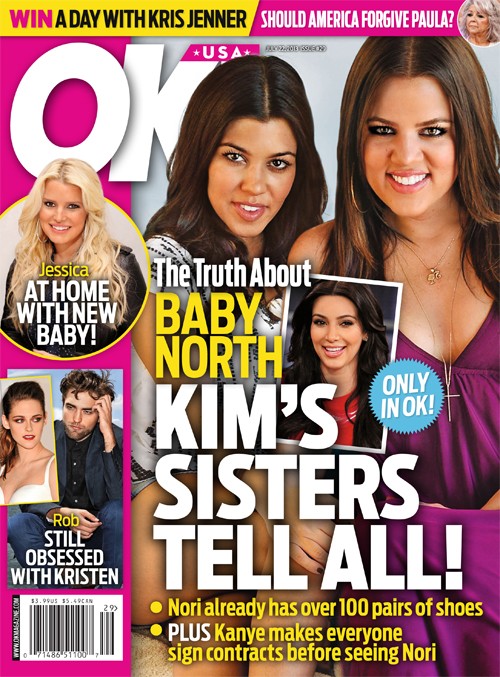 North West has more shoes than the average woman, OK! magazine states in their latest issue. We’ve already told you that Khloe Kardashian and Kourtney Kardashian have been obsessed with Kim Kardashian’s baby girl North West ever since she was welcomed into the world last month, but little did we know that the family are really spoiling little Nori with hundreds of presents.

A source has told the mag that all the family members have been showering North with baby gifts, including toys and clothing. Now, it’s a little odd that they’d give her toys at the age of just four weeks, but we guess they’ll be used once she’s a little older, right? Ha!

Khloe and Kourtney have been seen shopping at baby stores these last few weeks, and when they do make visits to these retailers, they don’t just go out to buy one item, they buy dozens — especially since Kim has been in hiding and refuses to leave the house, her sisters have taken on the role to do all the baby shopping for Kimmy while she continues to adjust to motherhood.

We’re sure that the 32-year old new mother didn’t ask for hundreds of shoes to be delivered to her house though. Ha. Whatever the case may be with that situation, North will be happy to know that she won’t be having to wear the same shoes more than once every three months — what a lucky four-week old girl she is, right?

As for Kimmy’s baby daddy Kanye West,  has started allowing close pals and family members to come and see his little girl.  Being the protective man he is, he will only grant them to get a glimpse of his child if they sign a contract that permits them from leaking any kind of information to the press, including photographs – that’s a massive ‘no, no’ for the rapper, OK! continues to add.

To read more on Kim’s life after pregnancy and how North West has been spoiled in the last few weeks, pick up OK! magazine’s latest issue on newsstands now.