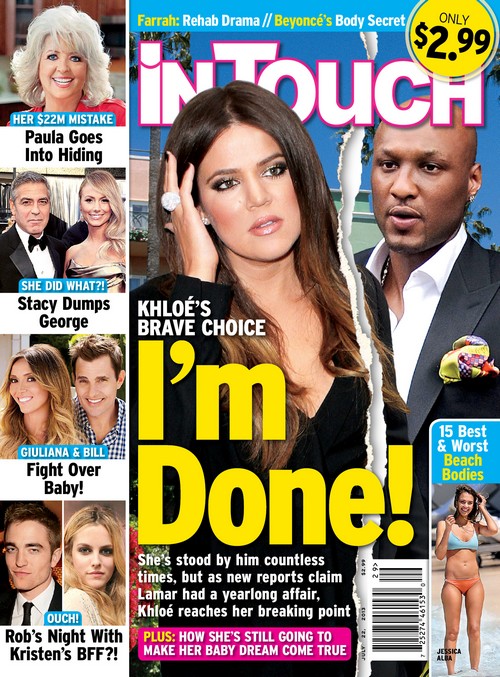 It looks like it’s Khloe Kardashian‘s turn to steal the headlines on the weeklies, especially after word has broken that she caught her husband, Lamar Odom cheating. Rumor has it that he has been meeting up with Washington D.C. Stripper, Jennifer Richardson on and off since January 2012 and Khloe is beyond fed up. According to the July 22nd print edition of In Touch she is feeling stronger and more confident than ever and has no intention of taking any crap from Lamar. Supposedly all of the problems that plagued the couple earlier this year were never fixed and cracks are starting to become very apparent in their marriage.

Rumor has it Lamar may have moved out of the home that they share in early June and Khloe has been left to decide whether she wants to beg him to fix things or to just let the marriage go because ultimately her husband has not proven to be very trustworthy.Also in the latest issue of In Touch if you were a fan of MTV’s The Hill’s then you’ll no doubt remember Lauren Conrad’s boyfriend at the time, Jason Wahler. Apparently he has decided that now is the perfect time to discuss his four suicide attempts and addictions. This confession coincides with MTV’s summer run of The Hill’s on their RetroMTV programming.

Do you think that Paula Deen has been vilified too much by the media? The one beloved Food Network star is now hiding out at home after that apology on the Today Show was an utter fail. Instead of turning things around for Paula it just made things worse and at this point Paula has to be wondering if there is any way at all to regain the public’s trust. In Touch has exclusive details on what Paula has done as business deals have slipped away one by one.  Grab the latest issue for more on these stories!