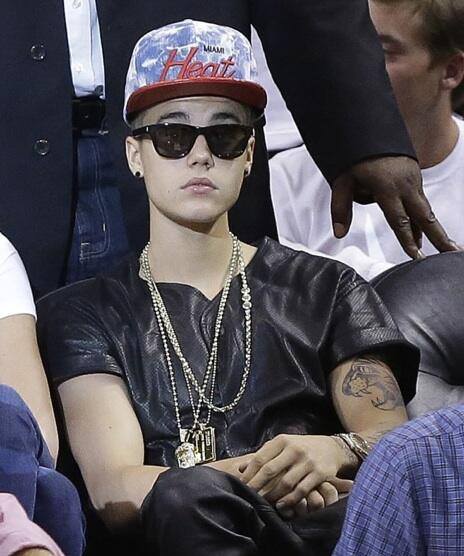 Justin Bieber acting out and creating a scene at a restaurant – is anyone surprised? Justin’s downward spiral has been well documented over the last year, and his public antics have been getting more and more obnoxious.

All of his neighbors hate Justin Bieber, his friends continue to sell him out, his ex-girlfriend is embarrassed to be seen with him, and his manager wants to send him to rehab.

In the end, something like this was to be expected. In fact, I’m surprised this video took as long as it did to surface. And it’s quite a disgusting video at that. Justin and his friends were leaving a club through the kitchen entrance when he decided he needed to pee. Instead of going to the bathroom like a normal person, he decided to pee in the kitchen mop bucket, all the while laughing hysterically.

His friends are screaming the background, ‘We’re the wild kids’, and then Justin decides to spray paint the words ‘F*** Bill Clinton’ on a wall picture of Bill Clinton.

What do you guys think of Justin’s behavior? One the one hand, he is still young and [very] immature. On the other hand, is this kind of behavior excusable for anyone, young or not? Let us know your thoughts in the comments.