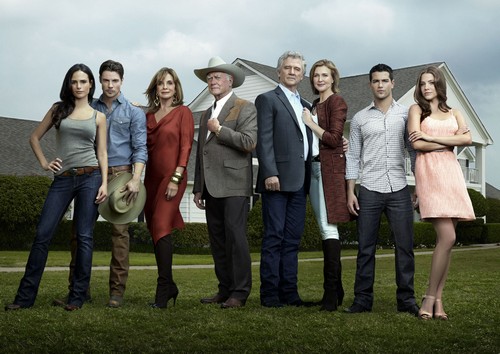 When a rebooted version of Dallas came back to television many wondered if the producers would be able to capture the magic of the original cult classic. They struck a smart cord by bringing back some old characters with the original actors that played them and then mixing in fresh characters and new blood to the cast. The show found its’ footing in season one and by the second season they seemed to be finding their groove until the untimely death of Larry Hagman in November of 2012.

The 81-year old actor was the glue that helped to bond old and new cast members and he went out of his way to make the younger set feel at ease. They started to feel confident that this was their show too and were no longer slightly intimidated by the likes of Patrick Duffy and Linda Grey.According to the July 22nd print edition of National Enquirer that has all changed. At first the cast bonded together over the loss of Larry but as time has worn on there is a clear cut division between the cast and everyone’s ego seems to now be coming into play. The producers have no idea how to get the situation under control because both sides are invaluable. The vets keep the show authentic and have drawn the original viewers back to watch and the younger cast is giving new viewers a reason to tune in.

How do you think the producers will manage to merge everyone and get them to work decently together again? Dueling egos can easily be the kiss of death to any show, will Dallas survive the in-fighting or is this reboot likely to be over just as quickly as it began? Tell us your thoughts in the comments below!

Dallas’ Return to TV is a Triumphant One (Photo)