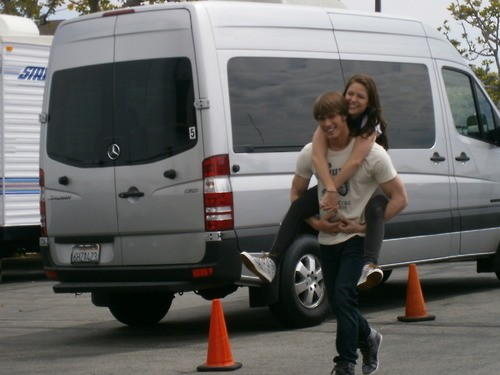 There must be something in the water because Glee has managed to pair off yet another couple. This time involves newcomers Blake Jenner and Melissa Benoist. The two have been dubbed the new Rachel and Finn on the TV show but I guess they were more Lea and Cory. Too much onscreen sexual tension definitely spills over into their reality. Although their relationship has developed quicker than anyone thought. The two are secretly engaged!!!

A source filled in US Weekly all the happy news but boy that was quick. They only came out as a couple not too long ago; and now they’re picking out china patterns? Apparently whatever the judges saw in him on the Glee project, Melissa must have seen in him as well.

But let’s not forget the several stars that have been down this route. Does anyone remember the scenario with married co-stars that get divorced? It makes awkward television to watch a character kiss her real life ex-husband. That little problem always takes the magic out of liking an on-screen couple. Then again their characters haven’t even hooked up on the show except for that one kiss. Before I did shipped them but now “keep it up writers keep it up”.

In honestly no one wants another Chad Michael Murray/ Sophia Bush situation to happen again.

Glee’s Heather Morris Is Pregnant: What Will Happen To Glee?