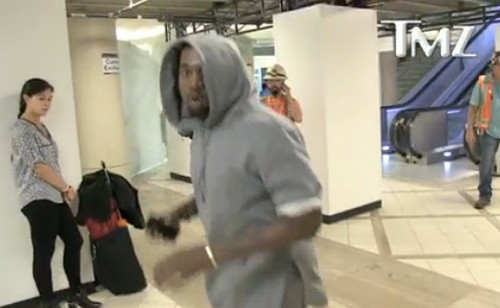 By this stage is anyone surprised Kanye West had another freak out. Come on, he never looks happy seeing photographers unless he’s trying to promote his “fashion sense.”  The only major shocker here is that he might have been thinking of someone besides himself for a change.

The photogs were snapping away photos of Kanye entering LAX airport when one person decided to say he appreciated Kanye’s work and was big fan. Kanye comes up to the guy, covers his camera, acts gracious for less than a minute, and then tells the cameraman not to talk to him. Kanye apparently is forbidding even his fans from talking to him now. He then went on to say “Don’t talk to anyone I know.”

TMZ has the exclusive on the story since it was their photographer.   Kanye said, “Don’t talk … don’t talk to me … I don’t wan’t to hear paparazzi talk to me or anybody I know … and tell everybody never talk to anyone that anyone knows … don’t talk to themselves .. DON’T TALK EVER AGAIN.”

The first part can easily be explained by Kanye acting a diva, but telling the paps not to talk anyone he knows is both unusual and stupid. Does this have anything to do with Lamar? The incident did occur after Lamar was being grilled by the paparazzi.

Is Kanye trying to show support for his girlfriend’s family? Well now his family too. Of course he then turned a sweet moment and took it too far. The cameraman can keep speaking all he wants and he did. He said he couldn’t wait for his sequel to a Jay-Z/Kanye album. In Kanye Universe that translates to Kanye ambushing him and grabbing the camera. Thereby pulling the same juvenile stunt he did back in 2008.

Head over to Twana Tells to see what she has to say about Kanye’s meltdown.  [CLICK HERE]