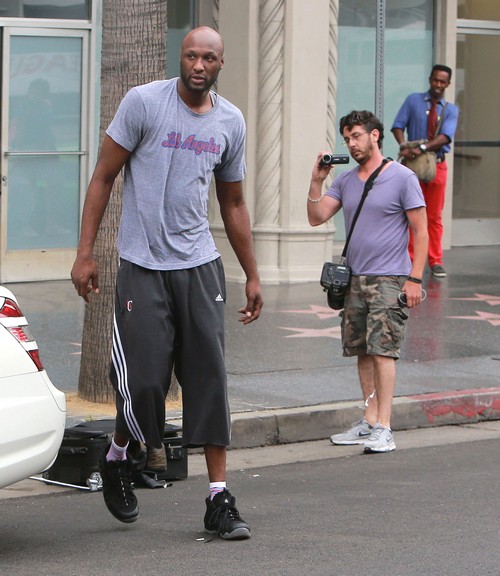 Khloe Kardashian and The Kardashian Klan  were seen gathering for an emergency conclave. And nope a pope didn’t have to die but the same can’t be said about Lamar Odom’s career and family life.  As many of you know by now there are only a certain few that escape trial by press.  Alec Baldwin and Charlie Sheen are always easily forgiven no matter what their mistakes and sometimes crimes may be.   The same cannot be said of a soft spoken giant,  Lamar married to a Kardashian of all people?  Sorry but the family does get a lot of hate.

Here’s the thing, Lamar went a little bit above and beyond. He grabbed a weapon and did vehicular damage. He also stopped mid-way through his anger to pose with fans. Posing with fans always wins stars brownie points but to go from throwing things to posing for pictures and then back to being angry is just really creepy.  It is not like he was trapped by the paparazzi, he was in his car. He could have driven away if uncomfortable at any minute.

Back to the conclave, Khloe was seen “downcast” as she rushed into the house. That’s understandable. What pinpoints the situation being dire is that Kourtney, Scott, and the Jenner boys weren’t smiling for the camera as they would usually do. For both Scott and Brody Jenner to look like someone died instead of giving even just a little smile we just know it must have been an emergency family meeting.

Lamar can find himself deeply in trouble over this but at the end of the day he has Kris Jenner in his corner. If she can build an empire off one sex tape, then she can help her son-in-law rebuild anything that was lost.