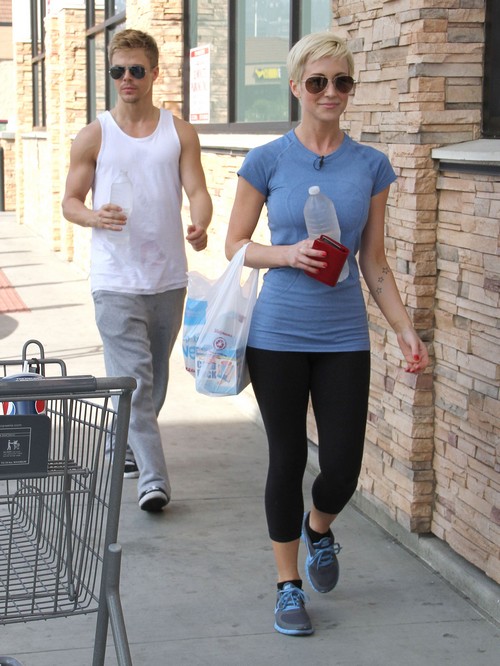 Who doesn’t love Derek Hough? The Dancing With the Stars Pro is handsome, has abs of steel and seems like a genuinely nice guy so it’s no wonder he has a stable of loyal fans and Kellie Pickler tops the list. The 27-year old country star won the mirror ball trophy with Derek on the May 21st season finale of Dancing With the Stars and those close to her say that Derek is all that Kellie talks about.

According to the July 22nd print edition of National Enquirer Kellie is driving everyone insane with her constant talk about Derek- including her songwriter husband, Kyle Jacobs. The bubbly blonde seems to think that Derek knows best in most areas and when it comes to having a music career she would love to lend him a hand. Back in 2009 Derek and Mark Ballas recorded an album that flopped and Kellie keeps insisting that if he were to go country he’d do well.

Kyle is said to not be the jealous type at all. He is used to Kellie going crazy over different people and becoming almost obsessive about their place in her life. Kellie actually suggested that Derek come to Nashville to record and stay at her house. That little invite is where Kyle stepped in and said no way. He doesn’t mind Kellie and Derek’s friendship but there’s no way that the latin ballroom champ is moving in with the couple!

Kellie has admitted to crushing on Derek, do you think that Kyle would be wise to keep an eye on his wife? Ballroom couples often date because it’s hard to spend all those hours intertwined and not have it turn into something else! Tell us your thoughts in the comments below