George Zimmerman Found Not Guilty of Murder But Is He Guilty of Child Molestation? – Report 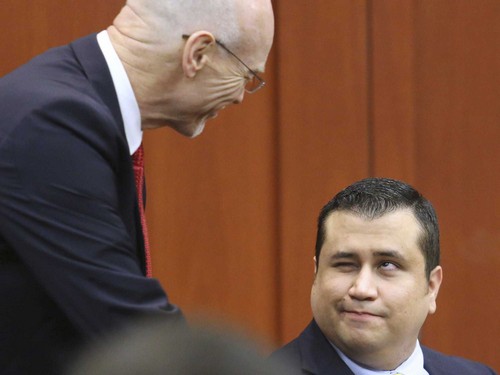 George Zimmerman was recently tried for second-degree murder and manslaughter involving the fatal shooting of Florida Trayvon Martin.  The jury found him not guilty of charges on Saturday, July 13, 2013. Now, several news/gossip outlets are saying that Zimmerman is now being accused of sexually assaulting his (then) six-year-old cousin, another young girl, and an ex-fiancee. Zimmerman’s legal team insist that “The content of this statement is not relevant to the issues of [the murder] case.” Do you agree with the shooting of Trayvon Martin’s jury verdict of “not guilty” ?

According to mediatakeout.com, the cousin said “it started when I was six… We’d all lay in front of the TV and we had pillows and blankets and he would reach under the blankets and try to do things and I would try to push him off but he was bigger and stronger and older. It was in front of everybody and I don’t know how I didn’t say anything, I just didn’t know any better… It’s not just me that he did these things to. “ According to the young family member, the molestation continued for years during family visits. The woman only came forward after Zimmerman “went into hiding” following the fatal shooting of Martin – she finally felt safe.

“This is the first time in my life that I’m not afraid of him. [H]e can’t get to me. If I saw him on the street or saw him anywhere it would just make me break down in tears, but now with everything going on I know that he’s not going to be out in public. I won’t go to Target and see him anymore. I’m not afraid of him anymore. “ One of Zimmerman’s ex-fiancee’s also testified that he repeatedly sexually assaulted her.

Individuals worldwide are divided over the outcome of the George Zimmerman’s murder trial, so this accusation just adds fuel to the fire.  What do you think of the accusations?  Hit the comments and let us know your thoughts!