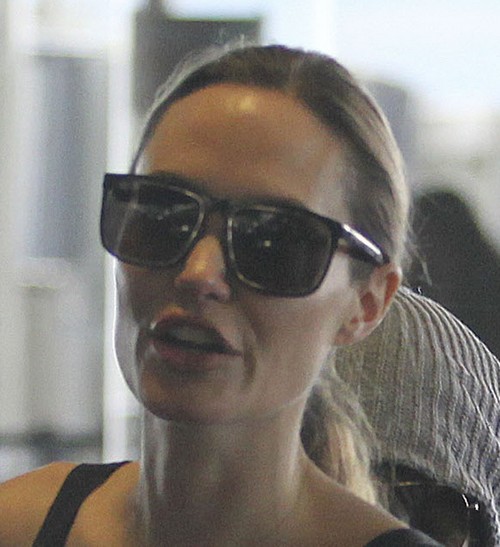 Angelina Jolie’s family tree is more than a bit complicated. Her mother, Marcheline Bertrand passed away in 2007 after battling Ovarian cancer. She and Angie were extremely close and the A-lister seemed to often be on the outs with her father, Jon Voight. Jon left Marcheline back in 1977 to perform in a production of Hamlet and basically never came home. His skirt chasing ways left Marcheline to raise 2 year old Angie and her 4-year old brother on her own. This info is kind of old, as Angie has alluded to it for years and has said that her fathers’ infidelity is a huge road block in the way of her having a relationship with her even as an adult. Things just got a bit interesting though as some new information has come to light.

According to the July 22nd print edition of Globe Magazine, Marie Miles, Marcheline’s god daughter  decided to break her silence after decades. As it turns out Marceline had written a series of letters to her mother and those letters were eventually given to Marie. The letters run from 1975-78 and document, in Marcheline’s own words the utter devastation that she felt at losing her husband of seven years and having to find her footing as a single mom to two small kids.

Marie claims to have notified Angie of the existence of the letters and reading her mothers words while dealing with heartbreak is said to have ensured that Angie will never let Jon p[lay a significant role in her life. He has met her six kids but it was under a bit of pressure from fiance, Brad Pitt. He thought that the kids should at least meet their grandfather but Angie is still hell bent on keeping them away from the man who hurt her mother so badly.

Why do you think that Marie is talking to the press now? Is she looking for extra cash? Tell us your thoughts in the comments below!