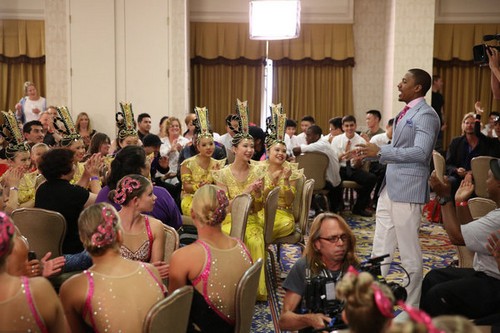 It’s Las Vegas week on America’s Got Talent and the acts compete in Las Vegas for a spot in the live performance shows.   On last week’s show the judges continued to scour the country in search of America’s most talented performers in the last of the auditions before Las Vegas.

We got to meet seventh-generation circus performer John Nock and his family.  They presented the Aerosphere Aerial Balloon Show and they were described as, “group act using giant helium balloons to present aerial performance, and the only act of its kind in the United States.”  They were amazing!  Did you watch last week’s episode?  We did and we recapped it here for you.

On tonight’s show acts compete in Las Vegas for a spot in the live performance shows.  Celebrity judges Howie Mandel, Mel B, Heidi Klum and Howard Stern narrow down the competition at Planet Hollywood Resort & Casino in Las Vegas.

The acts that made it through the first round of auditions must again perform for the chance to compete for America in the live shows. Nick Cannon hosts this variety competition series which features a colorful array of hopeful future stars as they compete for a chance to win a $1 million prize and become the most talented act in America.