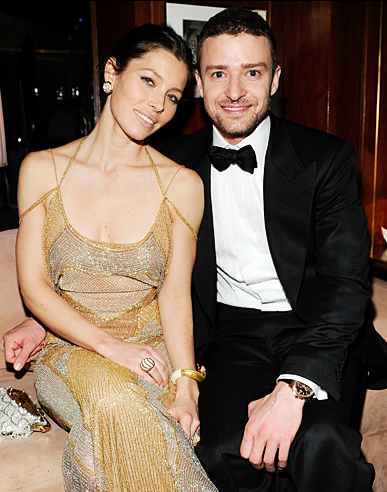 Trouble in Jessica Biel and Justin Timberlake land. Anyone who’s seen the music video for Justin Timberlake’s new video ‘Tunnel Vision’ can admit that it’s quite explicit and raunchy. There are naked butts and boobs, and a just a lot of naked women in general.

According to a new report from Star Magazine, Jessica Biel is furious that the video is so risqué. A source tells Star, “Justin didn’t warn Jessica. She was in shock when she saw it. She thought it was tasteless. She was hurt that Justin never thought to ask her to be a part of it. Justin told her it’s just art. But she’s having a hard time accepting it. I doubt she’ll watch it again.”

Well, Justin is an ‘artist’ so of course he’s going to use that excuse. But I don’t think Jessica is completely unfounded in her distrust. Justin has supposedly cheated on Jessica in the past, and having a bunch of naked ladies in your music video doesn’t exactly scream everlasting love for your wife. Then again, he’s a musician and it was a music video, not real life. She pretends to be in love and makes out with guys for a living, so how can she complain?

There are also differing opinions on the song itself. Some people see the part about ‘tunnel vision’ stating that he has eyes only for his wife, despite the multitude of beautiful women around him. Others are saying that the song signifies having tunnel vision only for the naked women in the video.

I can never understand music videos, so I can’t decipher heads or tails of it. What do you guys think?