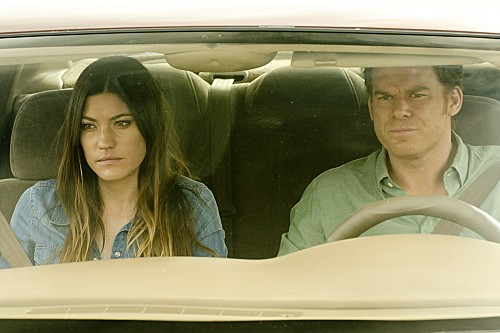 Tonight on Showtime Dexter returns tonight with a new episode.  On last week’s episode Deb got it into her head that she had to confess to LaGuerta’s murder to clear her conscious, oh crap…. Dexter had trouble dealing with it.  Dr. Vogel did not think dexter could.

Since Dexter was the reason she was out of control, so it was going to be difficult for him to help her Dexter continued his manhunt for the Brain Surgeon. Dr. Vogel tried to prove to Dexter that he was perfect as a psychopath.  Did you watch last week’s episode? If you missed it we have a full and detailed review, right here. So head over to get caught up before tonight’s episode.

On tonight’s episode Dexter tracks down another potential serial killer from Dr. Vogel’s list. Quinn celebrates his passing of the Sergeant’s exam by defending Debra’s honor in a fight. Dr. Vogel begins treating Debra for her PTSD.

Tonight’s episode is going to be another action packed one, which you won’t want to miss, we are down to the last episodes.