The Real Housewives of New Jersey Season 5 Episode 8 REVIEW “Scum One, Scum All” 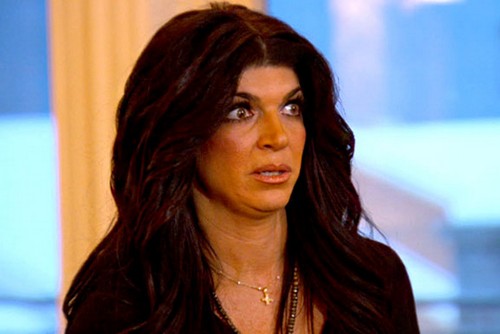 In the last episode of The Real Housewives of New Jersey, Kathy Wakile said she knew things could get ugly but did not expect something like this physical fight. Teresa Giudice is very defensive saying everyone is trying to prove her wrong. Kathy says we are not trying to prove you wrong. We are here to help you stop. That’s really big of Kathy to speak up like that, considering she, her husband Rich Wakile and the Gorgas, (Poison Joe and the JLo wannabe Melissa) were putting down Teresa and expressed skepticism about the retreat during the trip to Lake George.

The new episode of The Real Housewives of New Jersey begins with the last episode’s ugly brawl. Teresa ran out to get security to break up the fight, and then came back to help pull Juicy and Poison apart. Melissa is screaming that Teresa did not help her brother. Melissa, did you not see that Teresa came back accompanied by a huge man who promptly stepped in to break up the fight? Of course not. She is too busy hating Teresa and expecting the worst of her sister in law. Poison says in his talking head he has 10 years of hate against Juicy. He also feels Juicy put a wedge between him and his parents.

Next we begin to see the fallout from the fight. Teresa and Juicy Joe go back their bedroom. Emotions are running very high for everyone. Rich tries to hug Poison to calm him down. I always wondered how Rich could be calm when he is in the middle of family tension. He told Wet Paint it just doesn’t get to him. But then again it’s his wife’s family’s drama, not his. Maybe he just feels it’s more up to Kathy to be the one to fix the situation.

Now everyone is spouting their hatred. Melissa declares the situation is absolutely disgusting. Poison again says Teresa and Juicy are garbage, just like he did two seasons ago at his son’s christening. Teresa is in her room with Juicy yelling that she wants to punch Melissa. The others make their way to their rooms, too. Rich is very angry and this time he has had enough. He decides he needs to confront Teresa. Rich finally feels he needs to step in, not just to be supportive of his wife but because he personally wants to tell her off. He walks into Teresa and Joe’s room as they are deciding whether or not to go home. As usual Kathy doesn’t bring much to the table. She is angry but doesn’t offer any solutions.

Meanwhile Poison is falling apart. He is in tears and Melissa is trying to soothe him. Kathy’s sister Rosie Pierri feels she needs to speak with Poison. She goes to the Gorga’s room and suggests Poison speak with Teresa alone. Teresa says to Poison lets talk just you and me. She asks Melissa to leave so she and her brother can have some privacy. The JLo wannabe won’t leave the room. She feels she has to be strong for poison. Also, Poison is hesitant to talk to his sister after what just happened.

Steve and Stephanie the team builders make their way upstairs. I don’t know what they have to offer their clients. During the fight they just stood on the sidelines watching. Steve and Stephanie are obviously not equipped to handle family situations like the one they just witnessed. They knock on Poison’s door to talk to him first. Steve says this family if full of passion. Duh Steve! He says this passion is their Achilles heal but also what will bring them back together. Poison says to the clueless duo that he hates Teresa. He asks them if he and Melissa should go back to New Jersey. Steve says everyone is still here. That means everyone wants to work it out. Steve suggests Poison does not talk to his sister tonight.

The next morning everyone is getting ready for breakfast and they are all still bitching about how much they hate Teresa. How about giving her a little credit for wanting to try again to be a family? This retreat was her idea, and she had help from Rosie getting everyone on board. Now Teresa will take another step in making things right with her brother, sister in law and cousins. Teresa reaches out to Caroline Manzo to help her family. Teresa’s reasoning for calling Caroline is that she reached out to Poison and involved herself in the drama. I never ever though I would see Teresa make that call. Her and Caroline are on good terms but never went back to being friends. Caroline is horrified to hear of the brawl between the Joes. She tells Teresa she will try to come up. Caroline says in her talking head Teresa never asks for help. If she is reaching out it’s really serious. Caroline’s daughter Lauren is in the kitchen with Caroline and hears the conversation. She tells her mother she is not happy about Teresa calling her. Teresa was always saying everyone should mind their own business so why is she now asking for Caroline’s help? Caroline says since she got involved in the past she feels she can’t say no.

The agenda for day two of the retreat is working with Dr Venus Nicolino (Dr. V) The good doctor is a relationship expert that Teresa hired to help the family communicate better. You may remember Dr. V from the Bravo show L.A. Shrinks. Teresa likes that Dr. V. is Italian. She says it takes Italians to help Italians. Teresa says the therapist she and Poison spoke to last year did not get them because he is not Italian, but feels Dr. V. will be the right person for the job. Dr. V is introduced by Teresa to the rest of the family at breakfast. Of course they all start bickering immediately. The good doctor interjects saying everyone has a part in this problem.

Dr. V says she wants to talk to everyone individually. She chooses to speak with Poison first. It’s funny to me that he is wearing a Poison t-shirt from the 1980s, and that he is Poison. Poison Joe tells Dr. V. he feels Teresa set up the retreat to hold it over everyone’s head later. He also admits he isn’t ready to move forward with his sister. Dr. V then brings Teresa back into the room. She tells Teresa she has to stop trying to bring her brother and Melissa down. Dr. V. then says she wants Poison tells Teresa how is feels about her. Poison Joe speaks in a low voice like he is sorry for what he is about to say to his only sister. Poison tells Teresa he doesn’t want to fight and he doesn’t’ trust her. Poison wants to walk away for now. He says he hates her. Teresa speaks up saying she does not hate him and never hated him. Dr. V is agreeing with Poison that they should stay away from each other for now, but then changes her mind. She thinks Poison and Teresa should spend time together alone. Teresa says she isn’t sure Poison wants to spend time with her. He reaches over to hug his sister. Both of them are in tears.

In the mean time Caroline shows up to the retreat. She walks into the kitchen to be with the others. Melissa says in her talking head it’s embarrassing that another person has to step in to help solve the family’s problems. Rosie says she will never hire team builders again. They were in shock and didn’t know what to do.

In the next episode we will see more of how Dr. V tries to get through to everyone. Rich said, “You peel it and you find new things. As for the parents, I think things are going to get exposed. Maybe not this season, but down the line. I hope it does.”