Khloe Kardashian Reflects On Her Life Without Lamar Odom (Photo) 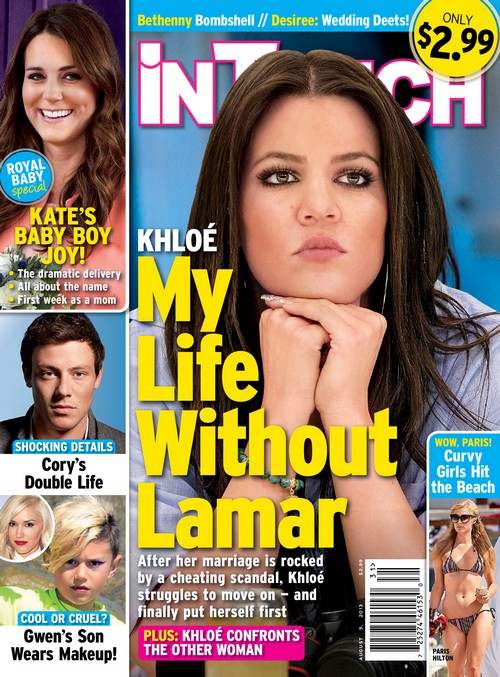 The current issue of In Touch features the cover story, “Khloe – My Life Without Lamar.”  Rumors have been swirling the internet for months now that all is not good in the Khloe Kardashian and Lamar Odom household.  A women, Jennifer Richardson claims that she and Lamar have been having a torrid affair.  She goes on to claim that Lamar wanted to have a baby with her.  Considering the problems Khloe has had getting pregnant this has all been a shocking blow to the poor girl.  She has decided enough is enough!

Now In Touch is reporting that Khloe is taking matters into her own hands and has confronted Jennifer, the other women.  I am not sure what she thinks that is going to solve, but I guess if it makes her feel better.

Khloe has finally started to reflect on what life would be like without Lamar.  Will she be able to deal with the other women?  According to In Touch, “After her marriage is rocked by a cheating scandal.  Khloe struggles to move on – and finally put herself first.”

Do you believe that Lamar really cheated on Khloe for over a year with Jennifer? You have to admit, he hasn’t exactly been hiding his bachelor pad activities this year. He has cavorted with more strippers than most single men do in their lifetime! Is it time for Khloe to let him go or should she try to salvage their marriage?