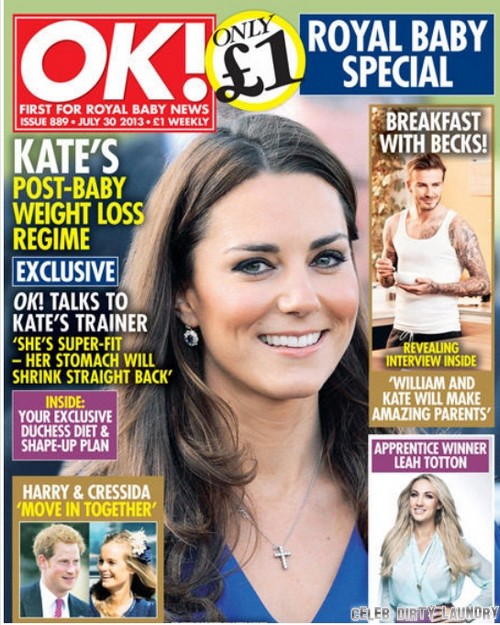 The Royal pregnancy is over and now there’s a healthy little boy getting spoiled by pretty much everyone. However let’s remember this is Kate Middleton. When has anything ever been cut and dry with her?

There’s a new royal scandal and, again, it’s not even Kate’s fault — but that’s how it’s going to spin. It seems not long after she gave birth someone decided to write an article on how she could lose all the baby weight. They even wrote an entire exercise regimen with the words “exercise” on a picture of Kate’s face. OK Magazine’s UK edition was the one to be guilty but now they’re being tried. There was a quick backlash about the article with many women (most likely moms) coming out to defend Kate’s “mummy tummy” (that’s what’s it’s called).

There were so many angry replies to the cover that OK has since apologized. Yet what many people haven’t figured out yet is that even though the magazine apologized they haven’t said anything that was truly hurtful. If the story was read then anyone would see they used Kate’s trainer to ask about post baby workouts. Let’s face it, Kate may be rocking the natural look now but a year ago she wanted to be so skinny the wind could have picked her up and blown away.

Should Ok have written the article so soon? Probably not. They could have waited until Kate was off maternity leave and say that’s how she got her body back. Do they deserve the boycotts though? No. The article was simply inappropriately timed and eventually that’s what others are going to start to say. Unfortunately, if the magazine experiences a slump then you can bet someone is going to be a pointing a finger at Kate soon.