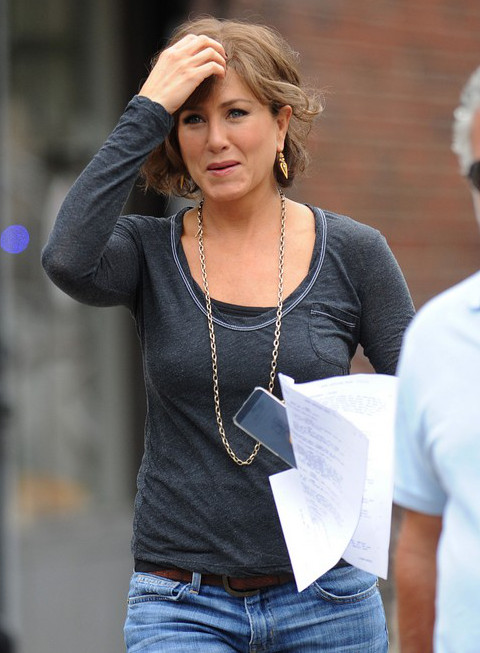 After nearly 20 years of looking picture perfect it’s finally Jennifer Aniston‘s turn to show that she’s not 25 any more. The actress has long been known for her love of exercise and her obsessive diet but she also parties pretty hard and smokes like a chimney. Jen stepped out the other day in a mini skirt and tank looking fab until photographers caught a closer glimpse. Up close the skin on her outer thighs is beginning to crepe and ripple.

According to the Aug. 5th print edition of Star magazine, bad habits such as drinking excessive alcohol and years of cigarette smoking do take a toll on your skin and so while Jen is super fit her vices still could easily be to blame for more obvious imperfections in her skin.

She’s not exactly stress free either which may be causing her to smoke and drink a bit more too. Don’t forget she and Justin Theroux have spent so much time apart in recent months that it has led to speculation of a split. He has been living in NYC while filming a pilot for HBO while Jen has stayed back in L.A. Do you think that only work has kept these two apart or is this another of Jen’s relationships that will ultimately come to a dead end, leaving her single yet again?

Perhaps just thinking about her bad luck with men and inability to pin down a good husband is one of the things that causes Jen to over indulge. I always find it interesting when super healthy people do crazy things to their body; I’m sure she’s distraught over these recently surfaced photos. What do you think? Do you think people should stop commenting on her body?