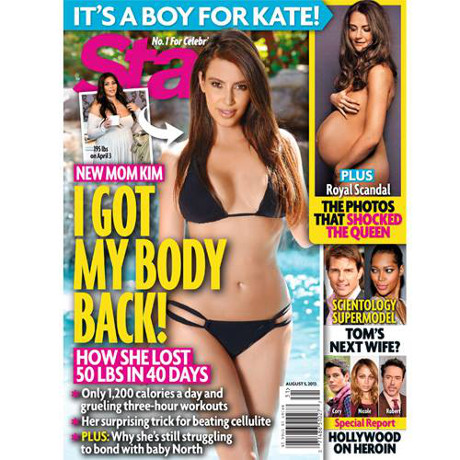 It has been nearly 6 weeks since Kim Kardashian gave birth to little North West. Perhaps one of the reasons why we have yet to catch a glimpse of the twosome is because they are rarely together! While Nori is cared for by an around-the-clock team comprised of top notch baby nurses, Kim is completely focused on reclaiming her sexy figure.

According to the August 5th print edition of Star magazine Kim’s mom, Kris Jenner is compounding the situation daily by pointing out any fat on Kim’s body. She also has been heard reminding Kim quite often that no one will hire a fat girl! As if Kim wasn’t going to have a hard enough time bonding with her child (she’s not exactly a natural mom), she certainly doesn’t need anyone telling her to focus on work right now! Of course Kris is invested because up until this year Kim was her golden calf and Kim’s assets have made the whole family a mint so she surely wants to see that money rolling in again.

While it’s not surprising to hear that Nori is number two on Kim’s priority list, it’s certainly pretty sad. This is her chance to reinvent herself completely and to emerge a better person who cares about something other than how big her ass looks on camera. Unfortunately, it sounds like Kim’s just not capable of doing that yet. Maybe she and Nori would have been better off as far from Kris as possible!

Do you think Kim Kardashian will ever be able to shift her attentions off herself and focus her care on her new child?