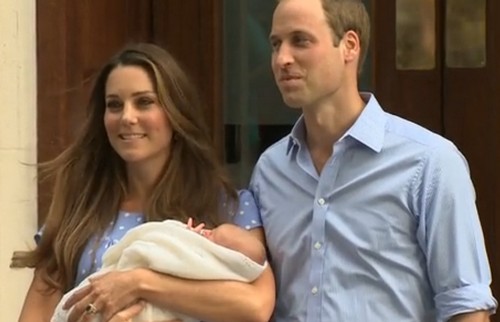 Prince Harry has finally met his nephew, the royal baby Prince George of Cambridge. Can you imagine the shenanigans these two will get up to when they’re older? Anyway, Harry spoke about his first experience meeting the baby, saying, “When I saw him he was crying, which is just like all babies. It’s fantastic to have another addition to the family. I only hope my brother knows how expensive my baby sitting charges are!”

Obviously, he’s not going to say that he’ll be taking George clubbing and partying the minute he’s old enough, so he instead says, “[My goal is] to make sure he has a good upbringing and to keep him out of harm’s way and make sure he has fun. The rest of it I’ll leave to the parents.”

Cut to twenty years from now, where George is called in front of the Queen to get chastised for partying in Vegas. ‘But Harry did it first!’ I can’t wait.

Harry also refused to say whether the baby looked more like Kate or William, which is fair. The baby is only four days old. It’s not like it will look like anything other than a wrinkled baby. What do you guys think of Harry’s comments about George? Are you excited about the adventures these two are sure to go on when George gets older? Let us know in the comments.