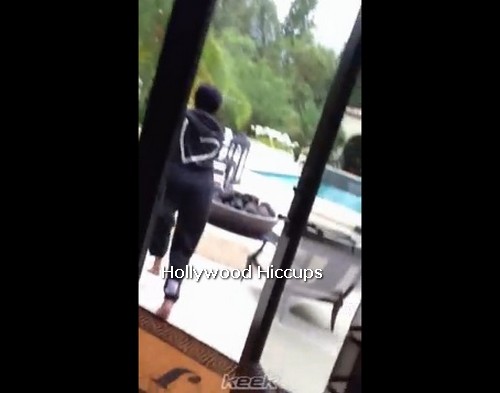 People have been very curious to see a photo of Kim Kardashian and Kanye West‘s new daughter North West.  This morning Kim Kardashian is claiming that a member of the paparazzi took their search for the elusive baby picture one step too far.  She claims a paparazzo broke into the Kardashian’s gated community attempting to score a picture of baby North West and make big $$$.

Kim posted a video to her Keek account which shows Kris Jenner running outside and chasing someone or so they claim.  But if you watch the video you see Kris running, but you don’t see anyone she is running after.  Why do I think this is just another Kardashian Family scam?  Are we actually suppose to believe that Kris would run after an intruder on the Kardashian Kompound???  Wouldn’t she have called security?

If they had time to film it all you would think they would have the person or the persons back or something on the video.  The only thing you see is Kris Jenner’s fat ass.

We are calling 100% bullshit on this story and video.  Check it out Hiccupers and let us know what you think!